You are here: Home / Collection / Dr. Bob Allen / The Souls of Black Baseball: Voices from the Field of Dreams Deferred

The Souls of Black Baseball: Voices from the Field of Dreams Deferred 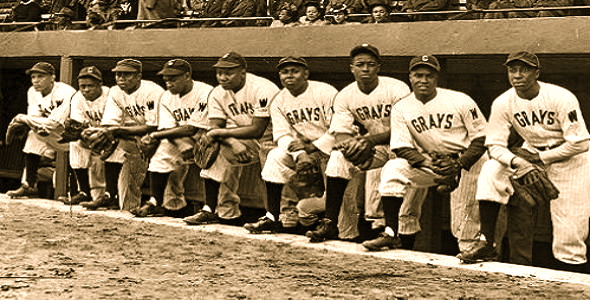 Veteran of the Negro League Baseball era, catcher for the Philadelphia Stars, Bill “Ready” Cash can spin out a story that takes away your own breath as he tells it. Like the one about the 28 day bus trip the team took in the late 40’s: going through towns 75-80 miles an hour because they had to make the schedule; blowing out motors and getting speeding tickets in the bargain; playing games along the way from Philadelphia, winding south 1900 miles away to Tyler, Texas.

On the field, in 105 degree weather, ready for the dressing rooms, but not allowed to use them. Had to go under the stands to dress. Only allowed a short run around the field for warmup as an old guy hollered from the stands, “nigger, I’m gonna shoot you.” Says Bill: “We still had to play ball. Out of those 28 days we were away from home, we was in bed four hours. All the rest of the time we slept in the bus, traveling.”

Cash continues the story, taking you on the northbound loop back home; like always, stopping now and then after games, at places that were open to get food, sandwiches, mayonnaise, meat, sodas, to eat on the way. Games along the way, night and day.

Cash recalls: “One Sunday we played in Birmingham. They had a little kid 16 years old and his father didn’t allow him to play, going away with the team. He only played on Sundays. He was batting’ third. Piper Davis was the manager. I said, Piper, you’ve got this kid hitting’ third?’ He said, you’ll find out.’ We were tied 6-6 in the seventh inning and he came up. Boy, I just knew we were gonna throw a ball by him. He got 4 for 5 against us that day. I hit a double off the scoreboard. The next guy hit a long fly to center field; he went back against the fence and caught it. I tagged up and went to third base. When I got there, the ball was waiting’ on me. That little 16 year old kid was Willie Mays. Boy, he could hit, he could …of course you know all about him…he could do it.”Â  This and many other stories, some tragic and sad, others side-splitting hilarious, are part of and emerging from an oral history project by Dr. Bob Allen, a free-lance writer and researcher, and former teacher at the Pennsylvania State University. Allen’s travel throughout the northeast in the last 8-10 years, and his intention to visit and interview on film every surviving player from the Negro Leagues, was based on a three part goal: to preserve, promote, and promulgate the history and stories of Negro League Baseball.

To date, the project has collected over 389 hours of film footage of Negro Leagues histories. Yet, there is more to be done and further support to continue the project is needed. A detailed description of the project is available to all interested. In summarizing the project, Allen notes:

“Without such histories being recorded, getting the actors to recall the play, and enabling future generations to see and understand the scene of the past “In time, we forget who we are.” As players from the old baseball Negro Leagues probe the scars and remember the joys of their finest hours amidst the apartheid at the heart of the nation’s pastime, this project will memorialize who they were so that we can better understand who we might be. Hopefully, it will make a special contribution to this important history of sport and American society; be of help and of use to veteran historians of the sport; and bring to life and keep alive the lessons and challenges we can all take up from this fascinating history.”

For further information, enquiries, and suggested contacts to help Dr. Allen locate and interview players, or to provide needed support to continue the project, please be in touch with: