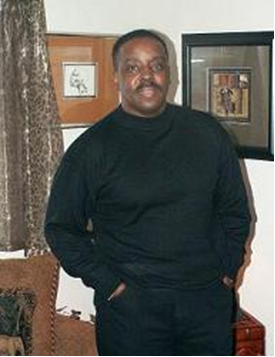 Lawrence E. Walker  was born on October 27, 1952 in Elizabeth, New Jersey.  He spent most of his adolescence years in the township of Elizabeth, NJ where he was raised and nurtured by his loving mother Ida Clyde Walker.  Growing up, he kept himself out of the hard knock street life by developing a love for the game ofÂ basketball and running track & field.  His mother also kept him grounded in church and faith by singing and playing the piano which he loved.

Lawrence knew the only way out of negative surrounding with the community that he loved in growing up in, he would have to go off to a college.  Two of his key turning points in his life at that time, was his mother telling him when he when off to college Was to remember what you are going off to college for and stay focus in on your studies, and what you are there for and make me proud. And the another point is a teacher telling him at the end of his English class the summer of 1972, Lawrence you may not be the smartest person in class, but what you have inside you is a determination, a desire and drive in life, that is what you want in life and that will give you your dreams to come.

In his four years study at Kean University, Lawrence demonstrated leadership skills in his classes, on the basketball court and in track in field.  He graduate from Kean University in Union, New Jersey in 1976 with a BA degree in communication.

In 1976, Lawrence E. Walker started his TV/Film Production career at CBS Broadcasting Network in New York City.  He worked in the Video Tape Library Department where he worked for about 8½ years and made him lead person in that department.  That opportunity afforded him the opportunity to work with a film company in New York City and then TKR Cable in Elizabeth, New Jersey working as a camera operator & video tape operator field/studio work. His position in the T.V. Production field was to shoot news and production work, field/studio & edit the news and put it together for the evening news.

In 1995, Lawrence E. Walker partnered and formed with Renardo Mack to start a production company called Bulls-Eye Production Inc. & the Lawrence E. Walker Foundation, Inc., (Lawrence E. Walker Foundation 2005) which would develop documentaries for Cable T.V & Network T.V.  Two of the award winning project was title: “Serve My Country, To Serve My Race” & “Here I Stand Determine.”  Back in 1996 he also had the opportunity to work with a brand new cable news network, New 12.  A 12 hour news network called News 12, Edison, New Jersey.  Editing news before it when to broadcast in the newsroom.

In 1997 he was awarded an Army Person of the Year Award in Philadelphia, Pennsylvania for being out the history of black women that served during World War II.  He was highlighted on 2-3 newspaper companies on the history being lost for over 50 years.  In 2000 he started working on his next project 6 hour documentary on Slavery & the Underground Railroad in New Jersey, Pennsylvania & New York during 1600-1800’s.  He spent 7½ years gathering research over 3000 documents, over 16,000 digital photographs, filmed over 30 historian & reenactments of the (colonial period) Revolutionary War and Civil War times.  This has never been done before within these states.  Working on this historical project he also was interviewing (African-Americans man & female) 160 veterans that served during World War II & the Korean War.  Lawrences long term goal is to take both these collections and put them into a museum, university or library for the schools, universities, communities and the world to access.  In 2009 Mr. Walker was commissioned by Kennesaw State University in Atlanta, GA., to collect data, research, photograph & film historical African-American churches, historical cemeteries & historical plantations from the 1700-1800’s.

Lawrence E. Walker has over 30 years experience in television broadcasting (producer, editing, show development, technical support, etc.).  Like (like his partner in Bulls-Eye Production, Inc.) Renardo Mack his long term goal is to open a Broadcasting Multimedia Academy to empower teens and young adults alike to create, write, produce, film, direct, manage and market not just a career path in the field of television but in life.