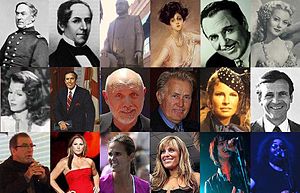 Many Spanish Americans are less active in Catholic church activities than was common in past generations in Spain; they rarely change their religious affiliation, though, and still participate frequently in family–centered ecclesiastical rituals. In both Spain and the United States events such as first communions and baptisms are felt to be important social obligations that strengthen clan identity.

A Spanish American is a citizen or resident of the United States whose ancestors originate from the southwestern European nation of Spain.   Spanish Americans are the earliest European American group, with a continuous presence since 1565.

In colonial times there were a number of Spanish populations in the present–day U.S. with governments answerable to Madrid. The first settlement was in St. Augustine, Florida, followed by others in New Mexico, California, Arizona, Texas, and Louisiana. In 1598, San Juan de los Caballeros was established, near present day Santa Fe, New Mexico, by Juan de Oñate and about 1,000 other Spaniards. After the establishment of the American colonies, an additional 250,000 immigrants arrived either directly from Spain, the Canary Islands or, after a relatively short sojourn, from present-day central Mexico. The Canary Islanders settled San Antonio de Bejar, San Antonio, Texas, in 1731.  Most of the Spanish settlers in present-day Texas, California, New Mexico, Colorado, and Arizona were of ethnically-mixed ancestry, or mestizo. Most self-identified Spanish-Americans in the Southwest differentiate themselves nominally from the population of Mexican-Americans who came after the Mexican Revolution.

The earliest Spanish settlements in then northern Mexico were the result of the same forces that later led the English to come to North America. Exploration had been fueled in part by imperial hopes for the discovery of wealthy civilizations. In addition, like those aboard the Mayflower, most Spaniards came to the New World seeking land to farm, or occasionally, as historians have recently established, freedom from religious persecution. Some of the new Spanish settlers were descendants of Spanish Jewish converts, while others were descendants of Spanish Muslim converts.