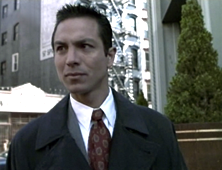 A Peruvian American (Spanish: Inmigración peruana en Estados Unidos) is an immigrant or descendant of immigrants from Peru that arrived in the United States. Among Peruvian Americans there are those of White (mostly Spanish), mestizo, Amerindian, and Afro-Peruvian descent, as well as others, including Italian, French, and German or a mix of any of these. A significant number are of pure or mixed Chinese or/and Japanese heritage.

Peruvians emigrate mainly because of political turmoil and economic hardships. Peruvian Americans are a relatively recent ethnic group as most of them moved to the United States after 1990. According to the U.S. Census Bureau it is estimated that 435,368 U.S. residents identify themselves as being of Peruvian origin.

Small but significant waves of immigration occurred in San Francisco during the gold rush (along with Chilean miners beginning in 1848) and the Metro Detroit area in the 1950’s. However, the majority of Peruvians that emigrated to the United States have arrived since the 90s. Peruvians typically emigrate due to economic reasons, to escape poverty and pursue a better quality of life. Significant demographics of Peruvians are found in New Jersey, New York, Miami and Los Angeles.