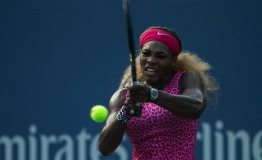 It’s on NOW! My girl! Your girl! OUR girl Serena Williams will be facing off for #18 against her home-girl Caroline Wozniacki! Best of luck! 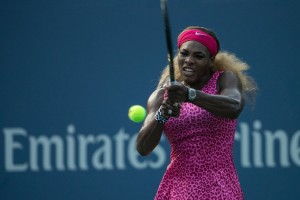 “If I can play Venus, I can play anybody,” Serena Williams said Friday after her 6-1, 6-3 semifinal victory over Ekaterina Makarova. Credit Uli Seit for The New York Times

Serena Williams knows the drill. On Sunday, when she looks across the net during the United States Open women’s singles final, she will see a player she knows all too well and a person she absolutely adores. And this time it will not be her sister Venus.

“Serena is one of my best friends,” Caroline Wozniacki, her opponent in the final, said in an interview in late July. “For a long time. But especially in the last year.”

The week before the Open, Williams said Wozniacki was the person she was closest to in the women’s game other than her sister.

It is not that difficult to pinpoint the reason.

“Sometimes things happen in life and you kind of need a friend,” Wozniacki said, “and she stepped up and was there for me.”

Serena Williams will meet Caroline Wozniacki on Sunday in the women’s final after cruising past Ekaterina Makarova in the other semifinal match.On Tennis: Focused Ferocity by Serena Williams on a Stage She Owns at the U.S. OpenSEPT. 5, 2014 Peng Shuai was treated and left the court in a wheelchair after she was overcome a second time during her match against Caroline Wozniacki.U.S. Open 2014: Caroline Wozniacki Reaches Women’s Final as Peng Shuai Collapses in HeatSEPT. 5, 2014. In May, when the golfer Rory McIlroy made the brief call to Wozniacki to cancel their wedding, Williams was busily preparing the bachelorette party. (“I always plan events,” Williams said.) When she heard the news of the breakup, she dropped everything. 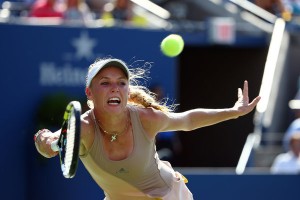 Caroline Wozniacki has a 19-3 record since Wimbledon and has reached her first Grand Slam final in five years. Credit Streeter Lecka/Getty Images

“I called Caroline, and we talked for a long time on the phone,” Williams said. “And it was just like: ‘O.K., you know, let’s figure this out. Because it’s not the end of the world. You know, you’re a baby, you’re 23. Things will look up.’ ”

It is a two-way street. Wozniacki said that when Williams was seriously ill in 2011, she visited her friend at her house in Los Angeles.

Both have found something meaningful in the friendship. Wozniacki said the advice that Williams gave after her breakup with McIlroy helped speed her recovery.

“She just told me the truth,” Wozniacki said. “Honestly, she just told me that it’s going to be hard and there’s no skipping anything. But when you get to the other side, you’re such a stronger person. Obviously, I didn’t see that at the time. It had just happened. But now I do feel strong. I know myself much better.”

Wozniacki’s professional results in the wake of the split seem to back that up. She won her first tournament of the year, she has a 19-3 record since Wimbledon and she reached her first Grand Slam final in five years when the injured Peng Shuai retired on Friday with Wozniacki leading, 7-6 (1), 4-3.

And Williams said that she admired the way Wozniacki handled the ordeal.

“To this day, she has nothing bad to say about her former fiancé,” Williams, 32, said. “Which I find really remarkable, and I think that just kind of sums her up. You know, she actually never has anything bad to say about anybody, and that made me a better person. You want to surround yourself with people who are genuinely happy for other people.”

Wozniacki, 24, said she was 17 when she first got to know Venus Williams while playing at an exhibition in Hong Kong before the Australian Open. They played doubles together and apparently enjoyed it so much that Venus asked Wozniacki if she wanted to be her doubles partner again in Qatar a month after the Australian Open. She agreed.