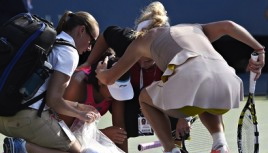 Caroline Wozniacki through to US Open Final 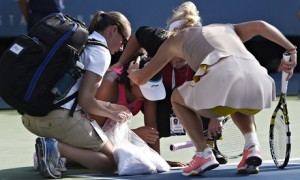 Five years after losing here to Kim Clijsters in her only slam final, the former world No1 Caroline Wozniacki gets her second chance to win a major – this time against her good friend Serena Williams, who hopes to draw alongside Chris Evert and Martina Navratilova on 18 grand slam titles.

So publicly at one during a summer when they endured a variety of personal and health problems, the battling Dane and the American legend arrived at the summit of the tournament via radically different routes in Friday’s semi-finals.

Wozniacki, seeded 11 and in splendid form after her split with fiance Rory McIlroy in March, watched her heat-distressed opponent Peng Shuai wheeled away in tears midway through the second set of the first semi-final in mid-afternoon.

The Chinese player was among several struck down in the draining conditions of a gruelling tournament, after Andy Murray, Benoît Paire, Julien Benneteau, Ivan Dodig and Steve Johnson all wobbled at some point. The latter two retired in the first round.

Wozniacki, who was leading 7-6, 4-3 with the ball in her hand ready to serve out the eighth game, expressed her concern for the unseeded Peng but was also thrilled to be in the final. “It’s incredible,” she said. “I’ve got goosebumps right now, five years since I’ve been in a final here.”

Peng, who has had a remarkable run in the tournament, collapsed after an hour and 53 minutes. She stopped before receiving serve when trailing 3-4 in the second set after an hour and 53 minutes of a fairly even struggle and grabbed at her left leg. It seemed cramp had struck – although doctors later described it as a non-specific “heat illness” – and she was rendered immobile when one point away from breaking back to level the scores.

Peng was helped from the court the first time to receive what the tournament director David Brewer called “an off-court medical assessment”. He explained: “When a player is in stress she is allowed to be evaluated by medical personnel. There is no time limit. You are allowed a reasonable amount of time.”

Wozniackiwas as confused as the spectators on a packed Arthur Ashe court, and filled in the break with some serving to keep her shoulder warm – not knowing, of course, if she would have to hit another shot to reach the final. Peng, meanwhile, was in tears in the locker-room, desperate to get back on court.