Roger Federer vs Marin Cilic, All Credits to © US Tennis Association 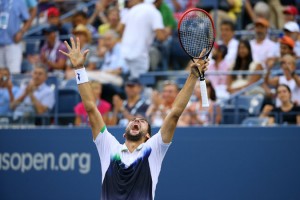 The draw to an 18th Grand Slam title, which he had been targeting since winning Wimbledon in 2012, had never looked more inviting for Roger Federer when he stepped on the court to play Marin Cilic late Saturday afternoon in the semifinals of the United States Open.

Gone were all other members of the Big 4 fraternity, the axis of dominance that had claimed 36 of the last 38 men’s tennis majors, from the French Open in 2005 to Wimbledon this summer.

Rafael Nadal did not play the tournament because of an injured wrist. Andy Murray went out in the quarterfinals to Novak Djokovic, the top seed, who was stunned Saturday by Kei Nishikori in the first semifinal at steamy Arthur Ashe Stadium.

After a rain-delayed start, all Federer had to do was defeat the 16th-ranked and 14th-seeded Cilic, to whom he had never lost, to establish himself as the heavy favorite in Monday’s final against Nishikori, the first Japanese man to reach a Slam final.

He could not come close.

Kei Nishikori, who left Japan at 14 to train in Florida, after defeating top-seeded Novak Djokovic in four sets on Saturday at the U.S. Open.Kei Nishikori Reaches U.S. Open Final, Beating Novak DjokovicSEPT. 6, 2014 interactive A Panoramic View From the Top of the U.S. OpenSEPT. 3, 2014. The execution was swift and convincing. Cilic overpowered Federer, 6-3, 6-4, 6-4, and perhaps, with Nishikori, sent a message to the world that the Big 4 reign was no more, or approaching its end.

Multimedia Feature: From Ashe to Williams, Rackets of U.S. Open Champions
Cilic said that Stan Wawrinka’s victory at this year’s Australian Open “opened the door for the second line.”

“Most of the guys have a bigger belief,” he said. While saying later that he believed “it was exciting for the game to have different faces,” Federer disagreed with the notion that the Big 4 was history.

“You said the same thing in Australia, everybody,” he said. “And then we know what happened at the French Open final, Wimbledon final.” He added: “I don’t think so, but. …”

He knew it had to be asked. Equally questionable is how many more chances — at least as good as the one he appeared to have here — the 33-year-old Federer will get to pad his record 17 Slams. He naturally preferred to characterize the defeat as a singular event, saying: “Marin played great. I maybe didn’t catch my best day, but I think that was pretty much it in a nutshell.”

Cilic, a 6-foot-6 Croat, two inches taller than his idol and coach, Goran Ivanisevic, called the 1-hour-45-minute rout “the best performance ever in my career.”