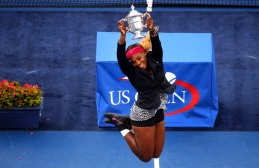 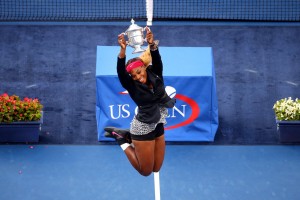 Serena Williams was asked last week what the number 18 meant to her. “It means legal to do some things,” she said, laughing.

But she knew what the reporter was getting at. “It also means legendary,” she added more seriously.

She would not go so far as to call herself legendary — “I’m just Serena,” she said — but she joined some elite company Sunday, when she tied Chris Evert and Martina Navratilova with her 18th Grand Slam singles title. 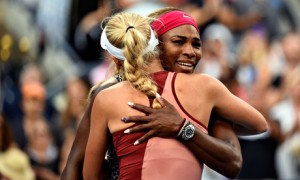 Serena Williams and Caroline Wozniacki share a hug after the American’s victory in the 2014 US Open final. Photograph: Alex Goodlett/Getty Images

The top-ranked Williams defeated Caroline Wozniacki, 6-3, 6-3, to capture her third United States Open final in a row and sixth over all.

Williams had not advanced past the fourth round of a Grand Slam tournament this year, and over the last two weeks she had expressed relief and excitement at her success at the U.S. Open. When Wozniacki’s final stroke went long Sunday, Williams collapsed on her back and started to cry. In a postmatch interview, she choked up saying the word 18.

“I have been trying to reach it for so long, since last year, well, since the beginning of the year,” said Williams, who received an 18-karat gold bracelet from Evert and Navratilova after the match. “I didn’t really think I would get there. I just felt so good.” 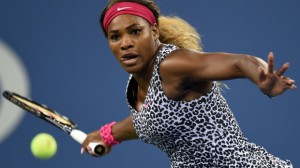 Williams survived a women’s draw decimated by upsets, the only player among the top nine seeds to reach the quarterfinals. Wozniacki, the No. 10 seed, was the highest-seeded player Williams faced, and even though she never lost more than three games in a set during the tournament, “it definitely wasn’t anything that was easy,” Williams said.

“It was a little bit more pressure on this Slam than the other ones because she hadn’t done well in the ones before,” said Sascha Bajin, Williams’s practice partner. “Especially the seeds going out early in the draw. The pressure just kept on rising. Everybody was expecting Serena to win.”

No one applies more pressure on Williams than Williams herself. But after a third-round loss at Wimbledon, Williams took a vacation with Bajin in his native Croatia, realizing, she said, “I just needed to relax a little more.”

When she returned to the tour, she won the tournament in Stanford, Calif., which helped her regain her confidence, Bajin said. She reached the semifinals in Montreal, then won again in Cincinnati.

By the time Williams arrived in Flushing Meadows, where she first won the U.S. Open in 1999 at age 17, she was back in the form that makes it “not fun to play her,” Wozniacki said.

Considering that, Williams seemed to be almost comically modest when she said before the match that she would “try to hang in there” against Wozniacki, whom she had beaten in eight of their previous nine meetings. 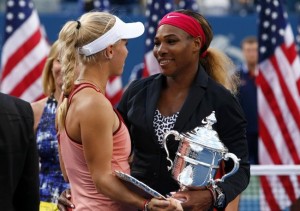 But that was what was required as both players made a mess of the first set. There were five service breaks in a row, with Wozniacki holding serve for the first time in the match in the eighth game, trailing by 5-2. When Williams served for the set at 5-3, a fan in the upper deck felt the need to shout, “Settle down, Serena!”  Williams closed out the set, but it was not one either player will want to save for posterity.

Williams settled down in the second set. In the first game, she won a 20-shot rally when a backhand clipped the net cord and dropped over to get two break points. She broke Wozniacki on the next point, and then started dominating service games. Williams lost only four points on her serve, one on a double fault, for the rest of the match.

Wozniacki was serving better, too, and relentlessly chasing down ground strokes.

“I think we both raised our level in the second set, and it was just a little too late for me,” Wozniacki said.

Williams broke Wozniacki one more time to end the match, winning a 26-shot rally to go ahead in the game, 15-30, and finishing it with a pair of forehands that Wozniacki could not handle.

Wozniacki, a 24-year-old Dane who held the No. 1 ranking for 67 weeks in 2010 and 2011, was in only her second Grand Slam final, having reached the U.S. Open final in 2009. She acknowledged being nervous and overwhelmed by the atmosphere at the start.

But Wozniacki’s appearance in the final capped a resurgent summer. Since losing in the first round of the French Open, her first tournament after the golfer Rory McIlroy broke off their engagement in May, Wozniacki is 25-6, three of the losses against Williams.

“I think I have definitely played better tennis these weeks than I have in the past,” said Wozniacki, who plans to run the New York City Marathon in November. “So it’s definitely a positive sign and a good sign for the future.”

Despite the on-court results against Williams, Wozniacki considers Williams one of her closest friends and has said she was a vital source of support during a difficult period in her life.

“You’re an unbelievable champion and an inspiration to me on and off the court,” Wozniacki said to Williams after the match, adding, “You definitely owe drinks later.”

Williams said she and Wozniacki would, in fact, be celebrating together Sunday night. But she did not allow herself to savor the moment too long, motivated as ever to move forward.

Williams, who turns 33 this month, is four major championships behind Steffi Graf for the Open-era record, and she was asked if she was thinking about 22.