You are here: Home / Education / Women Who Made History / Mother Alberta King 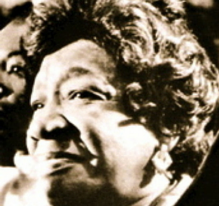 NAACP Director Expresses Sadness at the Death of Alberta King 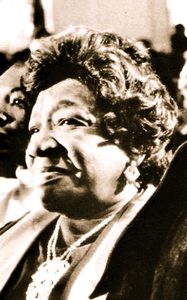 Alberta Christine Williams was born on September 13, 1904, to Reverend Adam Daniel Williams, at the time pastor of the Ebenezer Baptist Church in Atlanta, Georgia, and Jennie Celeste (Parks) Williams. Alberta Williams graduated from high school at the Spelman Seminary, and earned a teaching certificate at the Hampton Normal and Industrial Institute (now Hampton University) in 1924. 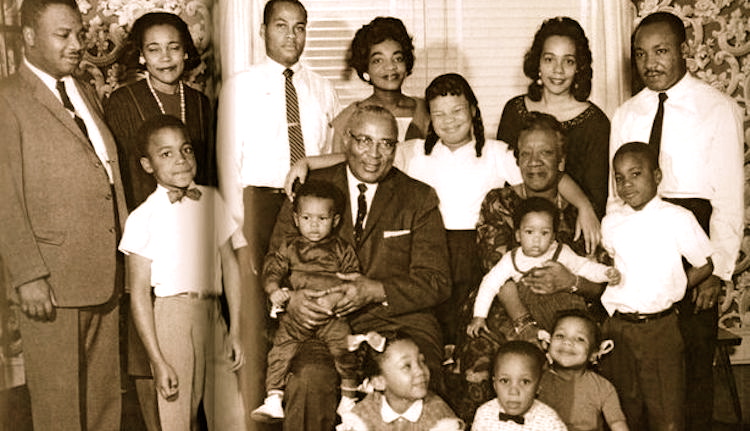 Williams met Martin L. King (then known as Michael King), whose sister Woodie was boarding with her parents, shortly before she left for Hampton. After graduating, she announced her engagement to King at the Ebenezer Baptist Church. She taught for a short time before their Thanksgiving Day 1926 wedding, but she had to quit because married female teachers were not then allowed.

Their first child, daughter Willie Christine King, was born on September 11, 1927. Michael Luther King Jr. followed on January 15, 1929, then Alfred Daniel Williams King I, named after his grandfather, on July 30, 1930. About this time, Michael King changed his name to Martin Luther King, Sr.

Alberta King worked hard to instill self-respect into her children. In an essay he wrote at Crozer Seminary, Martin Luther King Jr., who was always close to her, wrote that she “was behind the scenes setting forth those motherly cares, the lack of which leaves a missing link in life.”

Alberta King’s mother died on May 18, 1941, of a heart attack. The King family later moved to a large yellow brick house three blocks away. Alberta would serve as the organizer and president of the Ebenezer Women’s Committee from 1950 to 1962. She was also a talented musician who served as the choir organist and director at Ebenezer, which may have contributed to the respect her son had for the Black arts. By the end of this period, Martin Luther King Sr. and Jr. were joint pastors of the church.

Martin Luther King, Jr. was assassinated by a gunman named James Earl Ray on April 4, 1968, while standing on the balcony of the Lorraine Motel in Memphis. King was in Memphis to lead a march in support of the local sanitation workers’ union. He was pronounced dead one hour later. Mrs. King, a source of strength after her son’s assassination, faced fresh tragedy the next year when her younger son and last-born child, Alfred Daniel Williams King I, who had become the assistant pastor at the Ebenezer Baptist Church, drowned in his pool.

Alberta King was shot and killed on June 30, 1974, at age 69 by Marcus Wayne Chenault, a 23-year-old black man from Ohio, as she sat at the organ of the Ebenezer Baptist Church. Chenault stated that he shot King because “all Christians are my enemies,” and claimed that he had decided that black ministers were a menace to black people. He said his original target had been Martin Luther King, Sr., but he had decided to shoot his wife instead because she was close to him. One of the church’s deacons, Edward Boykin, was also killed in the attack, and a woman was wounded. Alberta was interred at the South View Cemetery in Atlanta. Martin Luther King, Sr., died of a heart attack on November 11, 1984, at age 84 and was interred next to her.

Chenault was sentenced to death; although this sentence was upheld on appeal, he was later resentenced to life in prison, partially as a result of the King family’s opposition to the death penalty. On August 3, 1995, he suffered a stroke, and was taken to a hospital, where he died of complications from his stroke on August 19, at age 44.

Alfred Daniel “A.D.” King – The Brother to the Dream

Did you know that Dr. Martin Luther King Jr’s younger brother was found dead at the bottom of a pool shortly after his Mother was Assasinated? …Yes this is true. And this should give you an even greater realization of the evil that men do. History is not meant to serve US. It is hidden from us so that these things can continue and it doesn’t seem like a pattern. But you would have to be a fool to not see what was going on then and STILL going on today. Only because of the internet were we able to realize the amount of Black men and Women being gunned down by police, because they like to sweep those stories under the rug quickly. But now we have people such as myself, and a lot of you who will see the stories and spread them so they don’t get “swept” before thousands and sometime millions see them. That is the importance of “sharing” these post and stories. Never assume that everyone has seen them already. It’s not just a friendly favor. You are actually helping people see that this isn’t just random incidents happening. This is overt. The more people that see that this has been going on, still going on, and will continue if we don’t wake up… the more chances we have of waking everyone up and actually getting somewhere.

“They killed my brother. I’m gonna find out who did it,” he told someone on the phone, within hearing distance of his daughter Alveda.

His body was discovered the morning after that anguished phone call in the bottom of the family’s swimming pool.

“Daddy was killed and put in the pool,” said Alveda, who was at work when the body was discovered. “When they pulled the body out, they began to pump his chest, but no water came out. One of the emergency people said he was dead when he hit the water.” Naomi, his wife who had been on vacation, flew back to Atlanta and, after identifying his body in the morgue, came to the same conclusion.

“Absolutely, he was murdered,” Naomi King said. “He was an excellent swimmer. There was no water in his lungs. He was in the fetal position. He had a bruised forehead. Rings around his neck. And he was in his underwear. He was murdered.” For his part, Daddy King said publicly that the civil-rights movement killed both of his sons, furthering the family narrative. 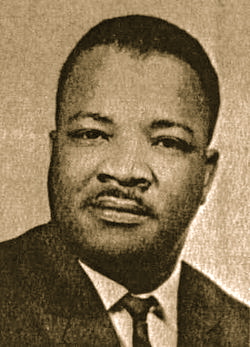 Alfred Daniel Williams King (July 30, 1930 – July 21, 1969), known as A. D. King, was the younger brother of Martin Luther King, Jr., the famed leader of the American Civil Rights Movement. A. D. King was a Baptist minister and a civil rights activist.

Alfred King was born July 30, 1930, in Atlanta, Georgia. He was a son of Reverend Martin Luther King, Sr., and Alberta Williams King, the youngest of their three children (the other two being Willie Christine, born September 11, 1927, and Martin Luther King, Jr., born January 15, 1929). In contrast to his peacemaking brother, Martin, A. D.—according to his father—was “a little rough at times” and “let his toughness build a reputation throughout our neighborhood.” p. 126 Less interested in academics than his siblings, A. D. started a family of his own while still a teenager and attended college later in his life. He was married on June 17, 1950, to Naomi Ruth Barber (born 1932), with whom he had five children: Alveda, Alfred II (d), Derek I, Darlene (d), and Vernon (1960–2009).

Although as a youth A. D. had strongly resisted his father’s ministerial urgings, he eventually began assisting his father at Ebenezer Baptist Church. In 1959, A. D. King graduated from Morehouse College. The same year, he left Ebenezer Baptist to become pastor of Mount Vernon First Baptist Church in Newnan, Georgia. He was a very good preacher and could have become a prominent preacher in society if it weren’t for the high roles his father and brother played in front of him.

Involvement in the Civil Rights Movement 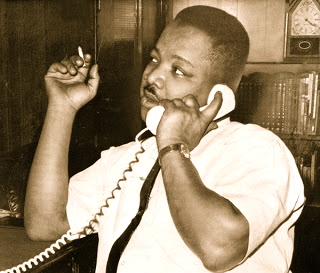 Alfred King was arrested along with King, Jr., and 70 others while participating in an October 1960 lunch-counter sit-in in Atlanta. In 1963, A. D. King became a leader of the Birmingham campaign, while pastoring at First Baptist Church of Ensley in Birmingham, Alabama. On May 11, 1963, King’s house was bombed. In August, after a bomb exploded at the home of a prominent black lawyer in downtown Birmingham, outraged citizens, intent on revenge, poured into the city streets. While rocks were being thrown at gathering policemen and the situation escalated, A. D. King climbed on top of a parked car and shouted to the rioters in an attempt to quell their fury: “My friends, we have had enough problems tonight. If you’re going to kill someone, then kill me; … Stand up for your rights, but with nonviolence.” Like his brother, A. D. was a staunch believer in the importance of maintaining nonviolence in direct action campaigns. However, unlike his brother, A. D. remained mostly outside the media’s spotlight. As one of his associates said, “Not being in the limelight never seemed to affect him, but because he stayed in the background, many people never knew that he was deeply involved, too.” A.D. tended to stay in his brother’s shadow and many people never even knew that Martin Luther King Jr. had a brother. He supported his brother throughout the movement but never took the limelight away from him.

A.D. was most involved in the civil rights activities during the Birmingham riots. Here he played a key role and was arrested multiple times. During Birmingham, A.D.’s house was bombed the night before Mother’s Day.

A.D. often traveled with Martin Luther King Jr. and was with him in Memphis on April 4, 1968 when his brother was shot dead. A.D. was in the room directly beneath Martin at the Lorraine Hotel when the gun blast went off. When he saw his brother lying mortally wounded, he had to be restrained by others because of the shocking and overwhelming sight. 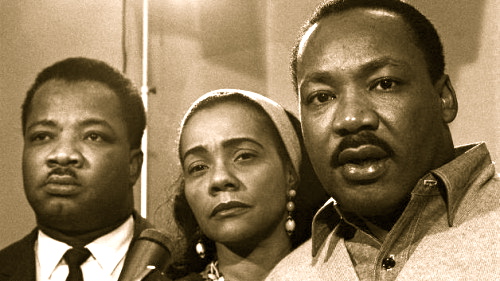 For the last part of his life, he was afflicted by alcohol and depression. In 1965, King moved to Louisville, Kentucky, where he became pastor at Zion Baptist Church. While there, King continued to fight for civil rights and was successful in a 1968 campaign for an open housing ordinance. After his brother’s assassination in April 1968, there was speculation that A. D. might become the president of the Southern Christian Leadership Conference (SCLC). A. D., however, made no effort to assume his deceased brother’s role, although he did continue to be active in the Poor People’s Campaign and in other work on behalf of SCLC.

After the death of Martin, A. D. King returned to Ebenezer Baptist Church, where in September 1968 he was installed as co-pastor. He was praised by his father as “an able preacher, a concerned, loving pastor”.

On July 21, 1969, nine days before his 39th birthday, A. D. King was found dead in the swimming pool at his home. The cause of his death was listed as an accidental drowning. However, it is also speculated that he died from heart problems as two of his children died young of heart attacks and one died at the age 49 of a heart attack.

His father, Martin Luther King, Sr., said in his autobiography, “Alveda had been up the night before, she said, talking with her father and watching a television movie with him. p.192 He’d seemed unusually quiet…and not very interested in the film. But he had wanted to stay up and Alveda left him sitting in an easy chair, staring at the TV, when she went off to bed… I had questions about A.D.’s death and I still have them now. He was a good swimmer. Why did he drown? I don’t know – I don’t know that we will ever know what happened.” Naomi King, his widow, said, “There is no doubt in my mind that the system killed my husband.”