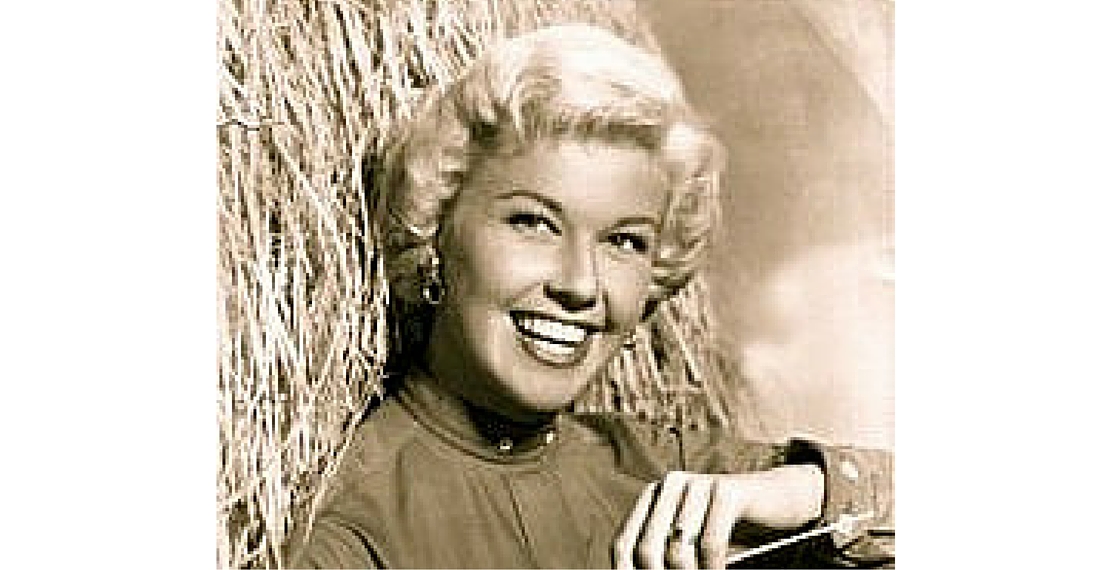 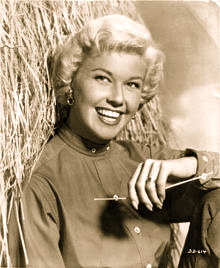 Doris Day (born Doris Mary Ann Kappelhoff; April 3, 1922 or 1924) is an American actress, singer, and animal rights activist. In 2016 Doris was said to of had an affair with George Michael.

Day began her career as a big band singer in 1939. Her popularity began to rise after her first hit recording “Sentimental Journey”, in 1945. After leaving Les Brown & His Band of Renown to embark on a solo career, Day started her long-lasting partnership with Columbia Records, which remained her only recording label. The contract lasted from 1947 to 1967 and included more than 650 recordings, making Day one of the most popular and acclaimed singers of the 20th century. She received the Grammy Lifetime Achievement Award and a Legend Award from the Society of Singers. In 2011, she released her 29th studio album, My Heart, which debuted at No. 9 on the UK Top 40 charts. As of January 2014, Day is the oldest living artist to score a UK Top 10 with an album featuring new material.

In 1948, Day was persuaded by songwriters Sammy Cahn and Jule Styne and by Al Levy, her agent at the time, to audition for Romance on the High Seas, which led to a 20-year career in film. She became well known for her string of musicals with Gordon MacRae in the early 1950s, and later, romantic comedies with handsome leading men such as Clark Gable in Teacher’s Pet (1958), Rock Hudson in Pillow Talk (1959), Lover Come Back (1961) and Send Me No Flowers (1964), Cary Grant in That Touch of Mink (1962), and James Garner in The Thrill of It All and Move Over, Darling (1963). She was ranked the biggest box-office star, the only woman appearing on that list in the era, for four years (1960, 1962, 1963 and 1964), ranking in the top 10 for ten years (1951–52, and 1959–66). She became the top-ranking female box-office star of all time and is currently ranked sixth among the top 10 box office performers (male and female), as of 2012. Day received an Academy Award nomination for her performance in Pillow Talk, won three Henrietta Awards (World Film Favorite), and received the Los Angeles Film Critics Association’s Career Achievement Award. In 1989, she received the Cecil B. DeMille Award for lifetime achievement in motion pictures. She made her last film in 1968.

Her strong commitment to animal welfare began in 1971, when she co-founded Actors and Others for Animals. She started her own non-profit organization in the 1970’s, the Doris Day Animal Foundation and, later, the Doris Day Animal League (DDAL). Establishing the annual observance Spay Day USA in 1995, the Doris Day Animal League now partners with The Humane Society of the United States and continues to be a leading advocacy organization. In 2004, she received the Presidential Medal of Freedom from President George W. Bush in recognition of her distinguished service to the country. Day is retired from acting and performing, but has continued her work in animal rights and welfare causes.

Doris Mary Ann Kappelhoff was born on April 3, 1922 or 1924 in Cincinnati, Ohio, the daughter of Alma Sophia (née Welz), a housewife, and William Joseph Kappelhoff, a music teacher and choir master. All of her grandparents were German immigrants.

The youngest of three siblings, she had two older brothers: Richard (who died before her birth) and Paul, several years older. Due to her father’s alleged infidelity, her parents separated. She developed an early interest in dance, and in the mid-1930s formed a dance duo with Jerry Doherty that performed locally in Cincinnati. A car accident on October 13, 1937, injured her legs and curtailed her prospects as a professional dancer. 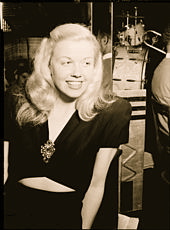 While recovering, Day started to sing along with the radio and discovered a talent she did not know she had. Day said: “During this long, boring period, I used to while away a lot of time listening to the radio, sometimes singing along with the likes of Benny Goodman, Duke Ellington, Tommy Dorsey, and Glenn Miller…. But the one radio voice I listened to above others belonged to Ella Fitzgerald. There was a quality to her voice that fascinated me, and I’d sing along with her, trying to catch the subtle ways she shaded her voice, the casual yet clean way she sang the words.”

Observing her daughter rekindled Alma’s interest in show business, and she decided to give Doris singing lessons. She engaged a teacher, Grace Raine. After three lessons, Raine told Alma that young Doris had “tremendous potential,” which led Alma to give her daughter three lessons a week for the price of one. Years later, Day said that Raine had the biggest effect on her singing style and career.

During the eight months she was taking singing lessons, Day had her first professional jobs as a vocalist, on the WLW radio program Carlin’s Carnival, and in a local restaurant, Charlie Yee’s Shanghai Inn. During her radio performances, Day first caught the attention of Barney Rapp, who was looking for a girl vocalist and asked if Day would like to audition for the job. According to Rapp, he had auditioned about 200 singers when Day got the job.

While working for Rapp in 1939, she adopted the stage surname “Day”, at Rapp’s suggestion. Rapp felt that “Kappelhoff” was too long for marquees, and he admired her rendition of the song “Day After Day.” After working with Rapp, Day worked with bandleaders Jimmy James, Bob Crosby, and Les Brown.

While working with Brown, Day scored her first hit recording, “Sentimental Journey”, released in early 1945. It soon became an anthem of the desire of World War II demobilizing troops to return home. This song is still associated with Day, and she rerecorded it on several occasions, including a version in her 1971 television special. At one point in 1945–46, Day (as vocalist with the Les Brown Band) had six other top ten hits on the Billboard chart: “My Dreams Are Getting Better All the Time,” “‘Tain’t Me,” “Till The End of Time”, “You Won’t Be Satisfied (Until You Break My Heart),” “The Whole World is Singing My Song,” and “I Got the Sun in the Mornin’.” By the time she left Brown’s band in August 1946, she was the highest paid female band vocalist in the world. 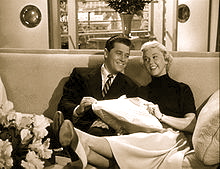 With Gordon MacRae in Starlift (1951)

While singing with the Les Brown band and for nearly two years on Bob Hope’s weekly radio program, she toured extensively across the United States. Her popularity as a radio performer and vocalist, which included a second hit record “My Dreams Are Getting Better All the Time,” led directly to a career in films. In 1941, Day appeared as a singer with the Les Brown band in a soundie (a Cinemasters production). During her separation from her second husband, George Weidler, in 1947, Day reportedly intended to leave Los Angeles and return to Cincinnati. Her agent Al Levy convinced her to attend a party at the home of composer Jule Styne. Her performance of the song “Embraceable You” impressed Styne and his partner, Sammy Cahn, and they recommended her for a role in Romance on the High Seas, which they were working on for Warner Brothers. Betty Hutton’s withdrawal due to pregnancy left the main role to be re-cast, and Day got the part after auditioning for Michael Curtiz. The film provided her with her first #1 hit recording as a soloist, “It’s Magic”, which followed by two months her first #1 hit (“Love Somebody” in 1948) recorded as a duet with Buddy Clark.Day recorded the song “Someone like You,” written by Ralph Blane and composed by Harry Warren, in circa 1948–49 before the 1949 film My Dream Is Yours, which featured the song. The song was given an 81 overall rating with conductor George Siravo’s score praised as “splendid.” It was subsequently recorded by Ella Fitzgerald in 1949 and Peggy Lee. 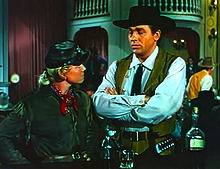 In 1950, U.S. servicemen in Korea voted her their favorite star. She continued to make minor and frequently nostalgic period musicals such as Starlift, The West Point Story, On Moonlight Bay, By the Light of the Silvery Moon, and Tea For Two for Warner Brothers. Her most commercially successful film for Warners was “I’ll See You in My Dreams,” which broke box-office records of 20 years’ standing during its premiere engagement at Radio City Music Hall in 1951. In 1953, Day appeared as the title character in the comedic western-themed musical, Calamity Jane, winning the Academy Award for Best Original Song for “Secret Love” (her recording of which became her fourth #1 hit single in the U.S.). Between 1950 and 1953, the albums from six of her movie musicals charted in the Top 10, three of them at #1. After filming Lucky Me with Phil Silvers and Young at Heart (both 1954) with Frank Sinatra, Day chose not to renew her contract with Warner Brothers. She elected to work under the advice and management of her third husband, Marty Melcher, whom she married in Burbank on April 3, 1951. 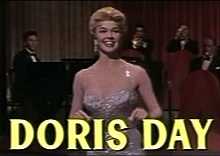 Having become primarily recognized as a musical-comedy actress, Day gradually took on more dramatic roles to broaden her range. Her dramatic star-turn as singer Ruth Etting in Love Me or Leave Me (1955), co-starring James Cagney, received critical and commercial success, becoming Day’s biggest hit thus far. [34] Day would later call it, in her autobiography, her best film performance. Producer Joe Pasternak said, “I was stunned that Doris didn’t get an Oscar nomination.”[citation needed] The soundtrack album from that movie was a No. 1 hit that stayed charted for twenty-eight weeks and became the recording industry’s third biggest selling album of the entire decade.