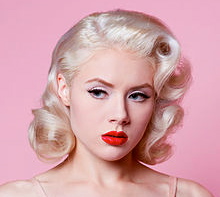 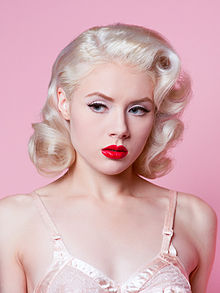 Mosh (born August 21, 1989 in Russia) is a Russian-American alternative model and burlesque performer. Called “one of the world’s leading alternative and fetish models” by ModelMayhem.com, she has been on the cover of Bizarre Magazine a near-record seven times, as well as LA Weekly, OC Weekly, Girls and Corpses, DDI Mag, and numerous others. She has been featured on Playboy.com and Maxim en Espanol, and also stars in the music video for Pink’s “Blow Me (One Last Kiss).”

Mosh was born in what was then the Soviet Union, but moved to the United States with her family at the age of three. She trained in gymnastics for more than 10 years in school and was a cheerleader in high school for even longer, but injured her elbow in her first year as an acrobat. This limited her movement, and soon she began developing an interest in fetishwear, bondage, and pinup photography, ultimately guiding her to alternative and fetish modeling and burlesque. 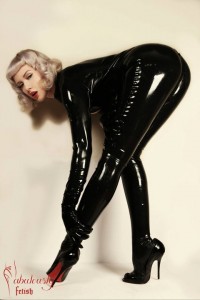 Mosh began building her modeling portfolio at the age of 17, networking on Modelmayhem.com to set up photo shoots with local photographers while juggling high school, a job and an internship. She learned how to do her own styling and makeup, partially out of necessity due to an inability to pay makeup artists, which led to the development of her self-styled signature look. After some years of modeling, Mosh began to combine her tease and fetish aesthetics with her gymnastic experience from her childhood, becoming a burlesque and fetish performer.

Her fetishes include latex, corsets, stockings, ropes, and more. She operates an exclusive pay-based website for her fans, which offers members-only photos, videos, and information.