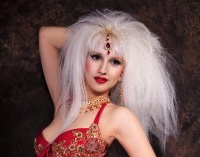 Sukki Singapora performs a shortened version of Henna Diamonds at her Asian Burlesque Spectacular. Shot by speliotis video of New York, May 2014 and special thanks to Steven Speliotis, Reiko Yanagi. 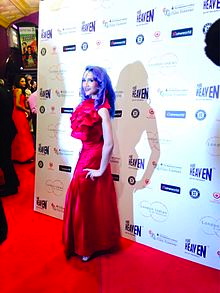 Sukki Singapora (born Sukki Menon, 1986, in Singapore) is a burlesque performer and model. She is best known for being the first international burlesque performer from Singapore. For her outspoken political views on freedom of expression for women in socially restrictive countries she was recognized with an “Asian Women of Achievement Award.”

Her career choice as a Burlesque performer, despite her stringent cultural background, has gained her a large international fanbase, leading to her founding The Singapore Burlesque Society in 2012: to protect Asian women (and men) wanting to pursue a career in burlesque.

Singapora was born to a Singaporean father and English mother, both doctors, and has two sisters. While young, her father moved the family to Cornwall, although she spent her childhood in a small Indian Singaporean community around the Goodman Road area in Singapore and was brought up with traditional Asian values. As a child, she trained in classical ballet. She became a British citizen at 18 and attended the University of Nottingham. After graduation, she worked in the IT Industry. 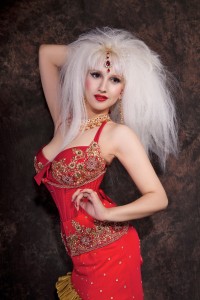 In February 2011, she auditioned for a part in a cabaret theatre near Manchester and was hired as one of the dancers. She was slowly given more solos and was offered other gigs; “I was fortunate enough to be offered enough shows that I no longer needed a day job.”

Singapora’s burlesque performances are noted for being lavish with elaborate costumes and a Bollywood-influenced style. Her emphasis is on sensuality and fusing Western and Eastern styles with a particular nod to classic Hollywood glamour and inspiration from Barbara Yung, a 1950’s American-Chinese performer.

She gained global recognition appearing in Esquire Magazine as “Women We Love,” FHM India and the front cover of international burlesque magazine Burlesque Bible and in 2013 her performances were praised for their daring attitude. Although she is successful in her field, she is also a passionate activist who campaigns for women’s rights.

Singapora became the first burlesque performer in the world to be invited for tea at Buckingham Palace for recognition of her contribution to the Arts as an Asian role model. She has noted that there is a taboo and disapproval surrounding burlesque within the Asian community and has worked to change the stereotypes and misconceptions about Burlesque and to encourage others to try the performance style. About her activism for Asian women, she stated; “This is not just an opportunity to prove that Burlesque can make a difference, it is a responsibility.”