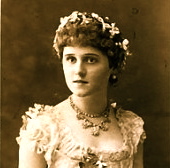 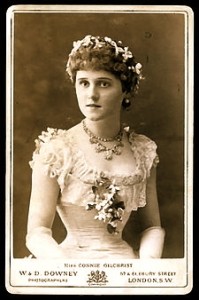 Connie Gilchrist (23 July 1865 – 9 May 1946) was a British child actress, dancer and artist’s model who at a very early age attracted the attention of the painters Frederic Leighton, Frank Holl, William Powell Frith and James McNeill Whistler, the writer and photographer Lewis Carroll and aristocrats, Lord Lonsdale and the Duke of Beaufort. She became a popular attraction on stage at the age of 12 in a skipping rope dance routine at London’s Gaiety Theatre, where she remained in Victorian burlesque and vaudeville throughout her formative years. Gilchrist, who became known as the “original Gaiety Girl,” had abandoned the stage by the time of her marriage in 1892 to Edmond Walter FitzMaurice, 7th Earl of Orkney.

Constance MacDonald Gilchrist (more commonly known as Connie Gilchrist) was born in Agar Town, London, the daughter of David and Matilda Maria (née Porter) Gilchrist. Her father worked as a civil engineer and her mother is most likely the model who posed for Whistler’s etching, Tillie: A Model. 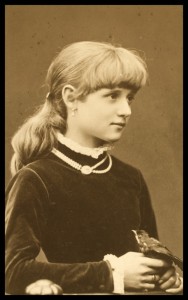 As an artist’s model Gilchrist first sat for Leighton at about age six. She was the Arab girl in his painting Little Fatima, all five little girls in Daphnephoria, the child in Study: At a Reading Desk and the student in The Music Lesson.. She posed for a series of works Holl based on W. S. Gilbert’s Little Mim, and was the child depicted in his painting The Deserter. Whistler captured Gilchrist’s jumping rope routine in his etching, Harmony in Yellow and Gold: The Gold Girl, and posed her for The Blue Girl, while other members of the Royal Academy of Arts, London, such as Frith, often placed her in their works as well. Lewis Carroll photographed her at age twelve and a year later wrote in his diary: she is losing her beauty and can’t act – but she did the old skipping-rope dance superbly.

Gilchrist’s first known stage appearance came by age 8 at the Drury Lane Theatre in 1873 playing the Prince of Mushrooms in a play entitled, Jack in the Box. Over the 1874–1875 Christmas season, she played Harlequin in an all-children’s cast of the pantomime The Children of the Wood, an adaptation of a Brothers Grimm fairy tale staged at the Adelphi Theatre London.

Gilchrist was engaged at London’s Gaiety Theatre in 1879, where she played numerous roles, beginning with Tiddi-widdi in an adaptation of Gulliver, Colomba in The Great Casmir by Charles Lecocq and Henry S. Leigh, adapted from the French of J. Prevel and A. D. Saint Albin, premiering on 27 September 1879, and Libby Ray in the Benjamin Edward Woolf comic opera The Mighty Dollar (1880); Baron Montgiron in The Corsican Brothers and Company, Limited by F. C. Burnand and H. P. Stephens (1880); Florence Dombey in Captain Cuttle, adapted from Dicken’s Dombey and Son by John Brougham (1881); Polly in Bubbles by Charles L. Fawcett (1880); Lord Lardida, Baron de Belgravia, in Whittington and his Cat by Burnand (1881); Maid Marian in Little Robin Hood by Robert Reece (1882); Anne in the Victorian burlesque Blue Beard; or, The Hazard of the Dye, by Burnand (1883); Miranda in Ariel, a parody of Shakespeare’s The Tempest (1883); Myrene in the Stephens and Lutz burlesque Galatea; or, Pygmalion Re-Versed (1883); Pauline in Called There and Back, Herman Charles Merivale’s burlesque of the Conway and Carr play, Called Back (1884).

In the summer of 1886, Gilchrist turned 21 and came to America with the Violet Cameron Comic Opera Company for an American tour that began at New York’s Casino Theatre with The Commodore, an adaptation by Henry Brougham Farnie of Offenbach’s, Le Creol. From 27 December of that year she played Abdallah in The Forty Thieves, a pantomime adaption of the classic by E. L. Blanchard staged at the Drury Lane Theatre. 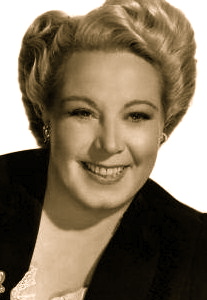 At some point by the early 1880’s Lord Lonsdale, a benefactor, purchased a house in London for Gilchrist and the other girls of the Gaiety Theatre. Lonsdale passed away in 1882, leaving the London house and a sizeable legacy to Gilchrist, much to the chagrin of Lady Lonsdale. Another benefactor, the Duke of Beaumont, was said to have actually adopted Gilchrist and stood in for her father when she married Edmond FitzMaurice, 7th Earl of Orkney, on 19 July 1892 at All Souls Church, Langham Place. Though a Scottish peer, he owned no property or other title there, but had inherited an estate in Buckinghamshire and some 11,000 acres in County Laois and County Kerry in Ireland that brought him an approximate £6,000 annual income in rents. After their marriage the couple quietly retired to Tythe House, Lord Orkney’s estate in Stewkley, as they were largely excluded from British upper class circles at the time. This did not seem to bother Gilchrist, who settled into country life and became known for generous contributions to local charities. Over their early years Gilchrist and her husband operated a hunting lodge on the estate grounds that led to a friendship with the family of Baron Rothschild. A hunting accident in 1906 ended Gilchrist’s participation in such forays.

Gilchrist died at Tythe House on 9 May 1946 after 53 years of marriage. The Earl of Orkney lived another five years, dying on 21 August 1951. Their only child, Lady Mary Constance Hamilton Gosling, survived.