Max Hamburger is a Swedish restaurant chain that was founded in 1968. The first restaurant opened in Gällivare, high up in the northern part of Sweden. Today there are 86 restaurant in Sweden. Max has long strived to minimize the business’ effects on the environment. Today, the company is taking that further, they want to show the world how a fast food chain can step up to and begin to take responsibility for its effects on the environment. “As a restaurant, we are part of the problem. But we want to be part of the solution; we want to be a role model for our industry. When we make public how our meals affect the climate, our guests can help us to lower our joint impact”, says Richard Bergfors, President of Max Hamburger. To make a platform for the environmental work they engaged experts to conduct an inventory of the company and the food’s total climate impact — from the farmers land to the finished hamburger. Currently, Max Hamburger are responsible for discharge about 29 000 tons of carbon dioxide equivalents (CO2e) each year.

Max Hamburgerrestauranger AB (Max Hamburger Restaurants Incorporated) is a fast food corporation which was founded by Curt Bergfors in Gällivare, Sweden in 1968. Bergfors’ oldest son Richard Bergfors is the current president since 2002.

Until the 1980s, Max was the largest hamburger restaurant chain in northern Sweden, with only a single restaurant outside of Norrland (on Drottninggatan, Stockholm). This changed during the 1990s, when they expanded to become a nationwide fast-food chain. By 2011, there were around 85 restaurants in Sweden, compared to 40 five years earlier.

From 2005 to 2010, Max expanded extensively to the western parts of Sweden, and in 2010, plans were announced to expand to Riyadh and Dubai with Kuwait following.  Three years later, Landmark Group were operating three Max restaurants in Dubai where the menu was modified to exclude bacon. The first restaurant in Norway opened on May 12, 2011.

Max’s relies on its Swedish heritage as a means of competing with the two major fast food-chains on the market, McDonalds and Burger King, but also embraces a multi-cultural image at the same time. Max has done advertising featuring children as well as adults with different ethnicity, dressed in traditional Swedish costumes (folkdräkt), and only music from Swedish artists are played in the restaurants, via the company’s own radio channel.

Max does not only offer traditional hamburgers but also healthier alternatives like the Delifresh menus, which ranges from 4% to 12.5% fat, served like regular hamburgers in healthier bread with the usual accessories. It also sells its own brand of salad sauce, which is quite popular. Max also features low GI and gluten free menus.

Max offers free of charge WiFi-access in most of their restaurants.

A Max Restaurant in Hammarby, Stockholm in Sweden.

Max was the first hamburger restaurant ever to outcompete McDonald’srestaurants, which happened in 1991 in Umeå and Luleå, where McDonald’s (who were later to arrive in northern Sweden than in Sweden’s major cities) in fact closed their restaurants before returning a few years later. In 2007, the popularity of Max forced the McDonald’s in Skellefteå, Piteå and, again, in Luleå out of business.

For nine consecutive years, Max has had the most satisfied customers among the nationwide fast food chains in Sweden, beating McDonalds and Burger King by large margins (Max Hamburgers 40%, McDonald’s (17%), Burger King (20%), Others (19%)), in polls conducted by commercial agency ISI Wissing AB. This may be due to the fact that Max’s made-to-order hamburgers are cooked as soon as they are ordered, even if it means that an order generally takes somewhat longer to be completed than what is typical for fast food restaurants. 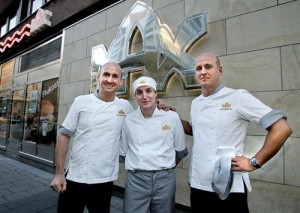 Richard Bergfors (CEO Max), Lars Andersson, Christoffer Bergfors (Vice CEO Max) in November 2007 after the press conference at the Max Vasagatan where Samhall and Max wrote on the cooperation agreement.

Founder Curt Bergfors wanted that Max would give the disabled a chance to work. He and his sons Christopher and Richard began an EU project with Samhall. Lars Andersson with ADHD and Dyslexia became pilots at the Max in Piteå. Lars Andersson and personnel manager Pär Larshans went to Brussels and presented the project, which in 2007 was appointed by the EU as the best labor market projects 2007th Max and Samhall has signed a nationwide agreement as to enable more disabled people would get the chance.