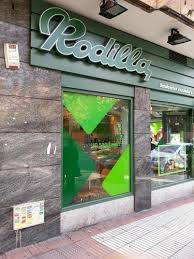 Rodilla is a restaurant chain in Madrid (Spain) specializing in sandwiches.

About 1939 or 1940 Antonio Rodilla opened a confectionery shop in Callao, the very heart of the city.  After some years he decided to sell a new line of products, cold meat (fiambre) sandwiches. Since it was difficult at the time to find a good bread supplier he decided to make his own bread as well, called “English bread”, or pan de molde(as opposed to the more traditional baguette-like bread).

In the early 70’s Rodilla opened two new establishments in Princesa and Orense streets, and in 1992 a new firm was created (“Artesanía de la Alimentación”) to centralize the production of their own raw materials.

Apart from both cold and warm sandwiches, Rodilla offers filled croissants, salads, pastries and fried dishes to eat in the shop or to take away.