You are here: Home / Collection / Pennsylvania / History of the House and David Bradford, Washington, PA.

History of the House and David Bradford, Washington, PA. 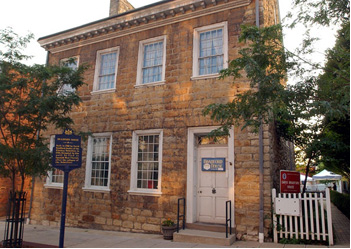 David Bradford was a successful lawyer, businessman, and Deputy Attorney General of Washington County. Construction of his house on South Main Street began in 1786 and was completed in 1788. His home reflected his high social standing, not only by its size, but also by its fittings. The magnificent mahogany staircase and the interior wood finishes show remarkable craftsmanship. The stone for the exterior was quarried near Washington, while the interior decorations came from the east and had to be transported across the mountains at great expense. It was, and is again today, an 18th Century architectural showpiece. This was all the more striking at the time, because Washington consisted largely of small, rustic, log buildings. During restoration of the house, a tunnel was discovered that appears to have led to what was then a steep ravine nearby. It is thought that this tunnel was constructed to provide a means of escape if this obviously wealthy house came under attack.

David Bradford and his family lived in this house from 1788 to 1794. However, his residence was cut short because of his involvement in the

Whiskey Rebellion. Local residents and landowners had longstanding grievances, caused in substantial measure by their isolation on the frontier. There were many land title issues, caused by competing title registries in both Virginia and Pennsylvania, and a host of absentee landlords (including George Washington). There were no local federal courts, which necessitated prolonged and burdensome trips to Philadelphia for trials. The area was still in danger of Indian attacks. And to make matters worse, the federal government imposed a high excise tax on whiskey. This tax was particularly onerous because the cost of shipping local grain to the East for sale was very high. Local farmers could sell their grain crops for more (and lessen their shipping expenses) by converting their grain into whiskey. So high taxes on this product were seen as a blow directed principally at frontier communities like Washington. When federal tax collectors appeared in the area to collect these taxes, local mobs drove them off and worse (including tar and feathering one poor official).

n 1794, President George Washington decided that the new federal government could not tolerate such lawlessness and ordered 13,000 troops to the Washington area. Upon learning that he would be arrested, David Bradford fled south to Spanish West Florida (which is present-day Louisiana). He took up a new life there and, in 1797, completed a home in St. Francisville. His wife, Elizabeth, and children joined him shortly thereafter. Eventually, David Bradford received a pardon for his role in the Whiskey Rebellion.

The house had its hard times. It suffered its greatest damage when converted into a furniture and coffin store in the early 1900’s. (Note the interesting second-floor windows in the photo on the right. You can click on this photo to see a larger version.) In 1959, the Pennsylvania Historical and Museum Commission assumed control of the house and supervised a restoration back to its original 18th-century design.  The house is again furnished as it would have been at the time it was built. The furnishings also reflect Bradford’s place in society. Landscape work in the rear of the house led to the discovery of an old well. It was repaired, and a well house characteristic of Bradford’s time was constructed. This fine example of gracious frontier living is complemented by a garden of plants, herbs and flowers, typical of the 18th-century.