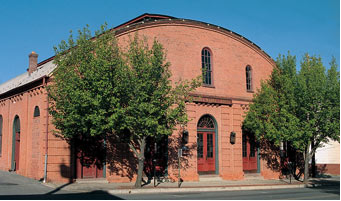 Situated along the Susquehanna River, Columbia was founded in 1728 and was originally known as Wright’s Ferry. The town served as a major transportation hub for those traveling along land, rail and river routes to other destinations. One of Columbia’s key businesses in its early history was shuttling passengers and cargo across the river, but the town later grew into an industrial hub for lumber, coal and assorted goods.

It was John Wright, a Quaker who traveled to Columbia to preach to Indians, who established a ferry in 1730 that provided access to land beyond the western banks of the Susquehanna. The Wright’s Ferry Mansion is still located at Second and Cherry Streets in the town. Once considered for America’s capital, Columbia’s historical district consists much of a Victorian-influenced architecture, with a range of styles from 18th century traditional styles to those of the 20th century Art Deco.

Today, these preserved houses are interspersed with warehouses and former factories – all of which are a piece of Columbia’s industrial past. The town plays host to a variety events and activities that celebrate the community’s rich stories, past and present. It’s flanked by neighboring rivertown Marietta, just a few miles down the road. Explore the entire region and its covered bridges on the Historic Rivertowns & Western Villages Trail.