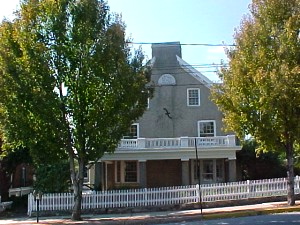 One of only two towns in Lancaster County with an officially-designated Main Street District, quaint Elizabethtown is tucked into northwestern Lancaster County and is home to a variety of galleries, small shops, museums and eateries. With its square is at the meeting of High and Market Streets, the downtown core is still dotted by many 19th and early 20th century buildings, which lend historic charm. Stories of the past are also told via vivid paintings on the sides of buildings throughout town. You can explore local artist Wayne Fettro’s hand-painted murals with a handy Small Town Murals Trail and find a taste of Elizabethtown’s history.

In its early days, the town was a notable trade center due to its convenient location midway between Lancaster and Harrisburg. Scots-Irish immigrants were the first to settle in the area, and in the early 1750s Barabas Hughes acquired land and turned the trading post into the largest between Philadelphia and Pittsburgh. By 1753, he laid out the town, which he named in honor of his wife. Further development was hampered by the French & Indian War, Revolutionary War and The War of 1812, but Elizabethtown still managed to establish itself. The arrival of the railroad in 1832 improved access to transportation routes, and an Amtrak train station still serves the town today.

Elizabethtown’s convenient location still applies to residents and visitors alike, as it’s just a short drive to neighboring Mount Joy and Hershey and is home to a variety of restaurants, hotels, country inns and campground.