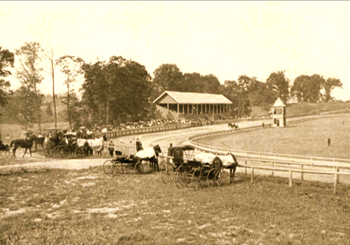 Weequahic Park is located in the eastern section of Essex County within the City of Newark. It is the second largest developed park in the county system with 311.33 acres, including an 80 acre lake.  The park is bisected by U.S. Route 22 and the Lehigh Valley Railroad (Conrail), creating in effect two smaller parks, which serve distinct neighborhoods. The name, stemming from language of the Lenni-Lenape Indians, is said to mean “the head of the cove.”

Acquisition of this land was a controversial matter in 1895.  Critics described it as a mosquito-laden bog and asked, “Who will use it?”  Originally intended as a reservation to serve future population growth, the rapid development of residential areas surrounding the park and the ready availability of mass transportation soon put that question to rest. The “reservation,” as it was first defined, rapidly evolved into a popular park with a variety of recreational activities.  The Olmsted Brothers finalized the design for Weequahic Park in 1901.

Weequahic Lake, the largest in the County, became a focal point of the newly-created park system. A half-mile trotting track already in place, known as the Waverly Fair Grounds, presented a unique feature. Amateur trotting races attracted thousands of spectators. The remains of the race track that flourished from 1900 to 1960 are still there. At one time a large grandstand, since demolished, was the site of many types of activities back when the park was used extensively for large city events.

By 1915 the resources of Weequahic Park included a nine-hole golf course the first public golf course in New Jersey.  In 1969 the course was redesigned to include 18 holes.

Three historic structures were built in 1916: 1) The Divident Hill Pavilion, erected in celebration of the City of Newark’s 250th Anniversary of its founding.  It marks the spot where Commissioners of Newark and Elizabeth met on May 28, 1668, to fix the boundary line between these two municipalities. The Divident Hill site had been used by the Lenape Indians to hold “pow-wows,” 2) The Elizabeth Avenue Children’s Building serving the adjacent playground, famous for its Gothic design, and 3) The Franklin Murphy Monument erected by the Essex County Park Commission in honor of Franklin Murphy, a park commissioner who became the Commission’s first president and went on to become governor of New Jersey. His foresight helped preserve sites like Weequahic Park for future generations.

Picture Above: THE TROTTING TRACK, 1901