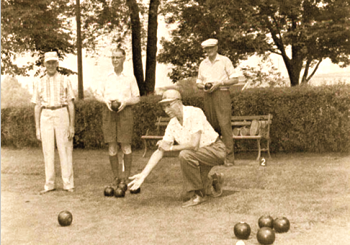 Watsessing Park is located on 69.67 acres in the Townships of Bloomfield and East Orange, in the eastern section of Essex County. The meandering Second River (originally Wigwam Brook), joined here by Toney’s Brook, flows through this long open park bounded by the Garden State Parkway, Glenwood Avenue, Cleveland Terrace, Dodd Street, and Bloomfield Avenue. It is the fourth largest park in the county system.

The name was derived from the Lenni-Lenape Indians, whose words for hill, (Watschu) and stone (Assan), are combined.

Land acquisition for this park began in 1901 when ten acres were donated by the City of East Orange to the Park Commission. Designed in 1899 by the Olmsted Brothers firm, it has been enlarged considerably since that time but reduced slightly when construction of the Garden State Parkway required the taking of some of the acreage. Monies paid for the right-of-way by the State helped improve the Francis A. Byrne and Hendricks Field golf courses along with the South Mountain ice skating arena and Turtle Back Zoo.