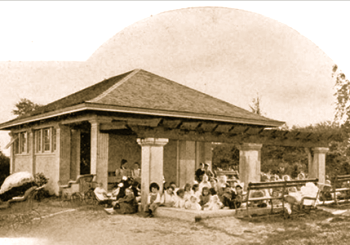 West Side Park is located on 31.36 acres of land in the Central Ward of the City of Newark between South 17th & South 13th Streets. It is the ninth largest park in the county system.  This location was a natural for a park in the center of the city and it has been heavily used from its inception to today.

The land was acquired as a “neighborhood park” by the original Park Commission in 1895. It was one of the first five parks that established the new park system.  The nucleus of this purchase included some of the highest land in Newark.  The Olmsted Brothers were commissioned to design the park.  Originally, West Side Park was developed on top of a hill overlooking a lake. The lake was later filled with soil to create flatland for play activities. This divided the park into two distinct parts: 1) the eastern half which is flat with few trees and, 2) the western half which is surrounded by statuesque linden trees. Steep slopes joining the two parts were once used for skiing.

In the early 1970’s the need for recreation in the inner city established the rehabilitation of West Side Park as a high priority for the County. By 1987 a major rehabilitation of the park was completed for a total cost of $2,800,000 dollars. This included a large community center complete with gymnasium.

Over the past century the overall character of West Side Park has changed more than any other park in the system, and today the park would be virtually unrecognizable to its creators.  Back in its hayday it was the showcase of the Park System, when the lake provided local kids with wading in the summertime and the arboretum was second to none in the city.  Terrace gardens in the southwest corner were an architectural highlight, and the stately mall reflected the influence of formal European park design.  The stone wall terraces have since been removed and replaced with a bandshell, the current orientation of the park being exclusively towards active recreation.

Picture above: A VIEW FROM THE UPPER LEVEL, 1910