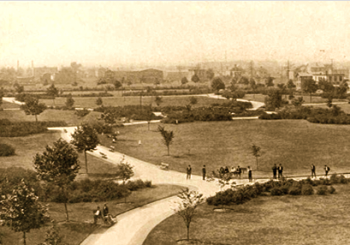 Independence Park is found in the eastern section of Essex County, in an area of Newark known as the “Ironbound” or “Down Neck” section. Its 12.69 acres are bordered by Walnut Street on the north, Oliver Street on the south, and Adams & Van Buren Streets west and east. It is adjacent to East Side High School.

The term “Ironbound” refers to the neighborhood’s physical boundaries of heavy industry on three sides and the Pennsylvania Railroad on the fourth. The latter term is derived from the fact that the area is located to the southeast of the main body of Newark and is connected by a “neck” of land. Nestled in this thickly populated area, Independence is one of the County’s smallest parks, second only to Riverbank Park, which is located nearby.

“East Side Park,” as it was first known, was acquired in 1895 to fulfill the Commission’s pledge to build “neighborhood parks” in densely settled areas. Designed by the Olmsted Brothers, it constituted part of the original park system. It is characterized by a bandstand at the center of a formal design that is symmetrically flanked by winding walkways and tree-lined promenades. In olden times when the park was just open space, local residents used it for volleyball, tennis, and bocceâ€”all popular at that time. Its current facilities still reflect these activities.

Picture Above: The Newly Completed Park, 1901