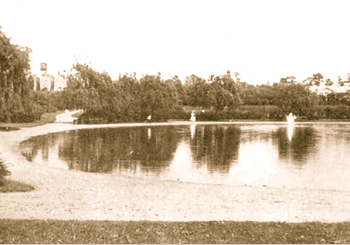 Irvington Park is a 24.38-acre, mid-sized urban park bordered by Lyons Avenue, Grove, May, and Augusta Streets in the densely populated Township of Irvington. It is the twelfth largest park within the system. Here lawn areas are framed by red oak, mulberry, dogwood, elm, and ash trees. A unique aspect of this park is its three-tier grading design. A small 1.65-acre pond fed by an artesian well provides fishing and model boat sailing.

This park was purchased for $ 56,000 in 1906. Construction began almost immediately in order to ready the pond for ice skating in the winter. The proposal was to develop the park along playground lines. The design was completed by the Olmsted Brothers and the park officially opened in the summer of 1913.

In 1914 an addition was approved that included ballfields, tennis courts, and broad lawns sloping to the west from Grove Street to Augusta Street. Work on this portion, including a new fieldhouse, was completed the following year. A well was driven to supply water to the wading pool, which has been closed due to pollution. This furnished an attractive little fountain as well.

The appearance of the park has changed little over the years. A 1979 UPARR grant provided $724,600 for site and building improvements.

Picture Above: The Wading Pool and Fountain, 1913