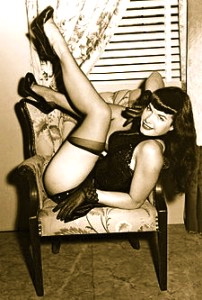 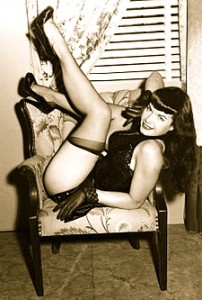 Bettie Mae Page (April 22, 1923 – December 11, 2008) was an American model who gained a significant profile in the 1950s for her pin-up photos. Often referred to as the “Queen of Pinups”, her jet black hair, blue eyes, and trademark bangs have influenced artists for generations.

A native of Nashville, Tennessee, Page lived in California in her early adult years before moving to New York City to pursue work as an actress. There, she began to find work as a pin-up model, and posed for dozens of photographers throughout the 1950’s. Page was “Miss January 1955,” one of the earliest Playmates of the Month for Playboy magazine. “I think that she was a remarkable lady, an iconic figure in pop culture who influenced sexuality, taste in fashion, someone who had a tremendous impact on our society,” said Playboy founder Hugh Hefner to the Associated Press in 2008.

In 1959, Page converted to evangelical Christianity and worked for Billy Graham, studying at Bible colleges in Los Angeles and Portland, Oregon, with the intent of becoming a missionary. The latter part of Page’s life was marked by depression, violent mood swings, and several years in a state psychiatric hospital suffering from paranoid schizophrenia. After years of obscurity, she experienced a resurgence of popularity in the 1980s. In 2013, a documentary on Page’s life, Bettie Page Reveals All, was released posthumously, and was narrated by Page herself.

Page was born in Nashville, Tennessee, the second of six children to Walter Roy Page and Edna Mae Pirtle. At a young age, Page had to face the responsibilities of caring for her younger siblings. Her parents divorced when she was 10 years old. (In the 1930 Census, a few weeks before Bettie’s 7th birthday, her mother Edna Pirtle Page was already listed as being divorced. After her father, whom Page would accuse of molesting her starting at age 13, was imprisoned, Page and her two sisters lived in a Protestant orphanage for a year. During this time, Page’s mother worked two jobs, one as a hairdresser during the day and washing laundry at night.

As a teenager, Page and her sisters tried different makeup styles and hairdos imitating their favorite movie stars. She also learned to sew. These skills proved useful years later for her pin-up photography when Page did her own makeup and hair and made her own bikinis and costumes. During her early years, the Page family traveled around the country in search of economic stability.

A good student and debate team member at Hume-Fogg High School, she was voted “Most Likely to Succeed.”On June 6, 1940, Page graduated as the salutatorian of her high school class with a scholarship. She enrolled at George Peabody College (now part of Vanderbilt University), with the intention of becoming a teacher. However, the next fall she began studying acting, hoping to become a movie star. At the same time, she got her first job, typing for author Alfred Leland Crabb. Page graduated from Peabody with a Bachelor of Arts degree in 1944.

In 1943, she married high school classmate Billy Neal in a simple courthouse ceremony shortly before he was drafted into the Navy for World War II. For the next few years, she moved from San Francisco to Nashville to Miami and to Port-au-Prince, Haiti, where she felt a special affinity with the country, its people and its culture. In November 1947, back in the United States, she filed for divorce. 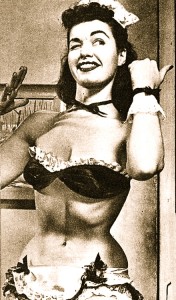 In 1949, Page moved to New York City, where she hoped to find work as an actress. In the meantime, she supported herself by working as a secretary overlooking Rockefeller Center. In 1950, while walking alone, along the Coney Island shore, Bettie met Officer Jerry Tibbs, with New York City police department. Jerry was an avid photographer, and he gave Bettie his card. He suggested she’d make a good pin-up model, and in exchange for allowing him to photograph her, he’d help make up her first pin-up portfolio, free of charge.  It was Officer Tibbs who suggested to Bettie that she style her hair with bangs in front, to keep light from reflecting off her high forehead when being photographed. Bangs soon became an integral part of her distinctive look. 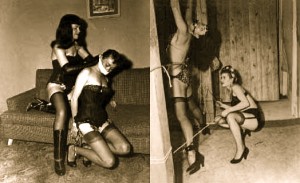 Klaw also produced a line of still photos taken during these sessions. Some have become iconic images, such as his highest-selling photo of Page—shown gagged and bound in a web of ropes, from the film Leopard Bikini Bound. Although these “underground” features had the same crude style and clandestine distribution as the pornographic “stag” films of the time, Klaw’s all-female films (and still photo’s) never featured any nudity or explicit sexual content. Commenting on the bondage photos and the reputation they afforded her, Page said retrospectively: 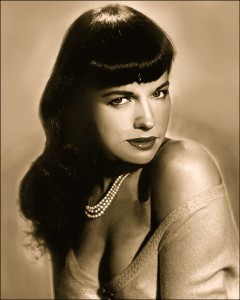 “They keep referring to me in the magazines and newspapers and everywhere else as the “Queen of Bondage.” The only bondage posing I ever did was for Irving Klaw and his sister Paula. Usually every other Saturday he had a session for four or five hours with four or five models and a couple of extra photographers, and in order to get paid you had to do an hour of bondage. And that was the only reason I did it. I never had any inkling along that line. I don’t really disapprove of it; I think you can do your own thing as long as you’re not hurting anybody else — that’s been my philosophy ever since I was a little girl. I never looked down my nose at it. In fact, we used to laugh at some of the requests that came through the mail, even from judges and lawyers and doctors and people in high positions. Even back in the ’50s they went in for the whips and the ties and everything else.”