Needless to say, Sally Rand was a popular attraction. In case you can’t tell, she’s not really nude, she’s in a bodysuit, but it’s a fantastic illusion. 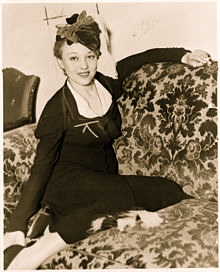 (April 3, 1904 – August 31, 1979) was a burlesque dancer and actress, most noted for her ostrich feather fan dance and balloon bubble dance. She also performed under the name Billie Beck.

Hattie Helen Gould Beck was born in the village of Elkton, Hickory County, Missouri. Her father, William Beck, was a West Point graduate and retired U.S. Army Colonel, while her mother, Nettie (Grove) Beck was a school teacher and part-time newspaper correspondent. The family moved to Jackson County, Missouri while she was still in grade school. Helen got her start on the stage quite early, working as a chorus girl at Kansas City’s Empress Theater when she was only 13. An early supporter of her talent was Goodman Ace, drama critic for the Kansas City Journal who saw her performing in a Kansas City nightclub and wrote glowing reviews. After studying ballet and drama in Kansas City, the teenage Helen decided her future lay in Hollywood. For a short time as she worked her way to the west coast she was employed as an acrobat in the Ringling Brothers Circus. She also performed in summer stock and traveling theater, including working with a then-unknown Humphrey Bogart. 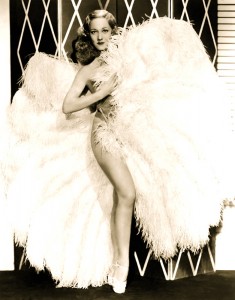 During the 1920’s, she acted on stage and appeared in silent films. Cecil B. DeMille gave her the name Sally Rand, inspired by a Rand McNally atlas. She was selected as one of the WAMPAS Baby Stars in 1927. After the introduction of sound film, she became a dancer, known for the fan dance, which she popularized starting at the Paramount Club, at 15 E. Huron, in Chicago. Her most famous appearance was at the 1933 Chicago World’s Fair entitled Century of Progress. She was arrested four times in a single day during the fair due to perceived indecent exposure after a fan dance performance and while riding a white horse down the streets of Chicago, where the nudity was only an illusion, and again after being bodypainted by Max Factor, Sr. with his new make-up formulated for Hollywood films. She also conceived and developed the bubble dance, in part to cope with wind while performing outdoors. She performed the fan dance on film in Bolero, released in 1934.

In 1936, she purchased The Music Box burlesque hall in San Francisco, which would later become the Great American Music Hall. She starred in “Sally Rand’s Nude Ranch” at the Golden Gate International Exposition in San Francisco in 1939 and 1940. 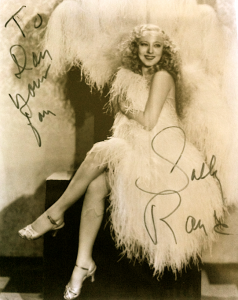 She was arrested twice in San Francisco in 1946; while performing at Club Savoy, she was arrested by six police officers in the audience as she danced, seemingly nude, in silhouette behind a large white fan; while on trial, the judge granted her immunity should she be arrested for the same offense while on trial; however she was arrested during a night of the trial while performing her act, despite her immunity and the fact that she was wearing long underwear and a note that read “CENSORED. S.F.P.D.” while performing that time. In an unusual move, the judge viewed her performance at the Savoy and cleared her of all charges after deeming that “anyone who could find something lewd about the dance as she puts it on has to have a perverted idea of morals.”

She appeared on television in March 12, 1957, in the first season, episode 13 of To Tell the Truth with host Bud Collyer and panelists Polly Bergen, Ralph Bellamy, Kitty Carlisle, and Carl Reiner. She did not “stump the panel” but was correctly identified by all four panelists (she was introduced as Helen Beck, her birth name). She continued to appear on stage doing her fan dance into the 1970’s. Rand once replaced Ann Corio in the stage show, This Was Burlesque, appeared at the Mitchell Brothers club in San Francisco in the early 1970’s and toured as one of the stars of the 1972 nostalgia revue “Big Show of 1928,” which played major concert venues including New York’s Madison Square Garden. It has been stated that she appeared with Tempest Storm and Blaze Starr. However, no corroborating sources for this statement have been found.

Rand died on August 31, 1979 at the Foothill Presbyterian Hospital, in Glendora, California, aged 75, from congestive heart failure. She was deeply in debt at her death. Rand’s adopted son told an interviewer that Sammy Davis, Jr., stepped in and wrote a $10,000 check which took care of Rand’s expenses. 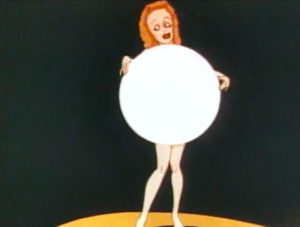 * In Tex Avery’s cartoon Hollywood Steps Out (1941), a rotoscoped Rand performs her famous bubble dance onstage to an appreciative crowd. A grinning Peter Lorre caricature in the front row comments, “I haven’t seen such a beautiful bubble since I was a child.” The routine continues until the bubble is suddenly popped by Harpo Marx and his slingshot, with a surprised Rand (her nudity covered by a well-placed wooden barrel) reacting with shock. Rand is referred to as “Sally Strand” here. Closer to the beginning of the cartoon, a coat check girl says “Good evening, Miss Rand,” as we see a woman’s hand offer her a set of feather fans to hang up.

* She was the model of several characters in Robert A. Heinlein’s science fiction stories, such as the Mary-Lou Martin character of “Let There Be Light.” She was also a guest of Robert and Virginia Heinlein at 1976’s 34th World Science Fiction Convention held in Kansas City, MO, where Robert Heinlein was the Guest of Honor; while at that Worldcon she served as a judge for the convention’s masquerade costume contest. She was also included in Heinlein’s final book, To Sail Beyond The Sunset, as a friend of main character, Maureen Johnson Long, mother of the character Lazarus Long.

* In the 1979 book The Right Stuff, the author Tom Wolfe described Sally Rand fan-dancing for the first American astronauts and other dignitaries and referred to the astronauts observing this sixtyish woman’s “ancient haunches”. In the 1983 film version of The Right Stuff, Rand was portrayed by actress Peggy Davis.