You are here: Home / Democracy Now! / Media / Cut Loose the Shackles of the Past

Cut Loose the Shackles of the Past 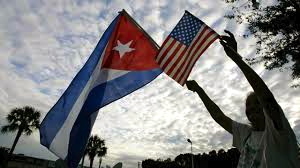 Cut Loose the Shackles of the Past: U.S. and Cuba Announce a New Dawn in Diplomatic Relations

President Obama and Cuban President Raúl Castro announced Wednesday that the United States will restore full diplomatic relations with Cuba for the first time in more than half a century. The historic deal will include the opening of a U.S. embassy in Havana and comes with a prisoner exchange. Live from Cuba, we go to Havana for reaction from Peter Kornbluh, director of the Cuba Documentation Project at the National Security Archive at George Washington University. “Finally after 55 years, an element of sanity and effectiveness and modernization has arrived to the insane U.S. policy that U.S. presidents have been pursuing towards Cuba or all these years,” Kornbluh says. He is the co-author of the book, “Back Channel to Cuba: The Hidden History of Negotiations between Washington and Havana.”

AMY GOODMAN: President Obama announced Wednesday the United States will restore full diplomatic relations with Cuba for the first time in more than half a century. The historic move will include the opening of a U.S. embassy in Havana. It was reportedly facilitated by Pope Francis and the Vatican, who helped begin secret negotiations last year.

The softened relations come with a prisoner exchange. Cuba has released Alan Gross, a subcontractor for USAID—that’s the U.S. Agency for International Development. He was arrested in 2009, sentenced to 15 years for smuggling illegal technology into the country for opposition groups. Also released was a Cuban who had provided information about Cuban spy operations in the United States. Obama did not identify the prisoner by name, but Newsweek reports he’s Rolando Sarraff Trujillo, a former Cuban intelligence officer who who worked secretly for the CIA until he was arrested on espionage charges in 1995. Meanwhile, the United States freed the remaining members of the Cuban Five—Gerardo Hernández, Antonio Guerrero and Ramón Labañino. The men were arrested in the United States in 1998 and convicted of conspiracy to commit espionage. But Cuban intelligence officers say they were not spying on the United States, but rather trying to monitor violent right-wing Cuban exile groups responsible for attacks inside Cuba. President Obama outlined the exchange as the prisoners were already returning home.

PRESIDENT BARACK OBAMA: Over many months, my administration has held discussions with the Cuban government about Alan’s case and other aspects of our relationship. His Holiness Pope Francis issued a personal appeal to me and to Cuba’s President Raúl Castro, urging us to resolve Alan’s case and to address Cuba’s interest in the release of three Cuban agents who have been jailed in the United States for over 15 years.

Today, Alan returned home, reunited with his family at long last. Alan was released by the Cuban government on humanitarian grounds. Separately, in exchange for the three Cuban agents, Cuba today released one of the most important intelligence agents that the United States has ever had in Cuba, and who has been imprisoned for nearly two decades. This man, whose sacrifice has been known to only a few, provided America with the information that allowed us to arrest the network of Cuban agents that included the men transferred to Cuba today, as well as other spies in the United States. This man is now safely on our shores.