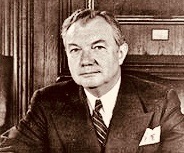 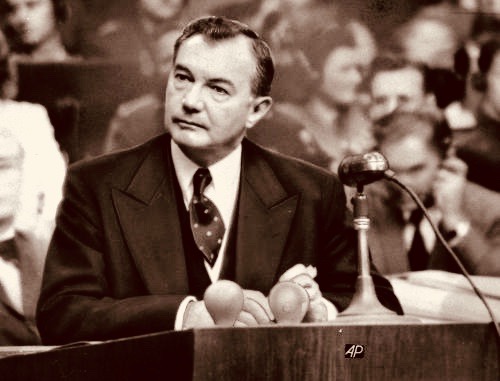 This is a 1946 photo of Chief U.S. prosecutor Robert H. Jackson seen during summation statements at the International War Crimes Tribunal at Nuremberg, Germany. (AP Photo)

Robert Houghwout Jackson (February 13, 1892  – October 9, 1954) was an American attorney and judge who served as an Associate Justice of the United States Supreme Court. He had previously served as United States Solicitor General, and United States Attorney General, and is the only person to have held all three of those offices. Jackson was also notable for his work as the Chief United States Prosecutor at the Nuremberg Trials of Nazi war criminals following World War II.

Jackson was admitted to the bar through a combination of reading law with an established attorney, and attending law school. He is the most recent justice without a law degree to be appointed to the Supreme Court. Jackson is well known for his advice that, “Any lawyer worth his salt will tell the suspect, in no uncertain terms, to make no statement to the police under any circumstances,” and for his aphorism describing the Supreme Court, “We are not final because we are infallible, but we are infallible only because we are final.” Jackson developed a reputation as one of the best writers on the Supreme Court, and one of the most committed to enforcing due process as protection from overreaching federal agencies. To find out more about Robert H. Jackson to to the link below: