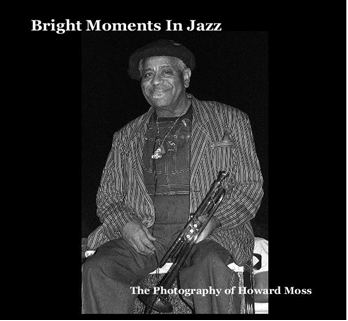 Bright Moments In Jazz is a selection from a large portfolio of live performance images captured in available light by Howard Moss.  The series represents a celebration of life, song and the spirit of the music.

HOWARD MOSS is a Filmmaker and Still Photographer based in Miami, Florida.  Moss’ photos have appeared in magazines, textbooks, on calendars and album covers, and has been exhibited at Museums, Galleries and Library Systems in the US and abroad.

HOWARD MOSS is Filmmaker and Still Photographer based in Miami, Florida.

His photos have appeared in magazines and textbooks, calendars, album covers, and have been exhibited at The Metropolitan Museum of Art and Pratt Institute the Anacostia Museum, The Miami Dade Library Collection.

Moss’ work in film and tape has appeared on the major networks & Public TV.

Moss has been Co-Producer and Director of Photography for Cable Programs entitled Horizons, which aired in Miami, and Cameraman/Director for two series produced for Public Television, Afro Arts and The Black Entrepreneur on Location. He has filmed Music Videos for Diana Ross & Sade and has shot numerous entertainment segments for BET and Sony Pictures.

Howard has contributed his writing skills to the creation of a documentary for the WPBT-TV Channel 2 entitled PROFILES. He has been a freelance writer for Underwater USA, Scuba Times Magazine, The South Florida Underwater Photo Society, and Detroit Free Press.

Moss efforts as Director/Cameraman won him 1st place honors in a Miami short film festival sponsored by IFP South and the Screenwriters Guild and an Honorable Mention award from the Louis Wolfson II Media History Center. He is a recipient of the State of Florida Media Arts Fellowship and the New Forms Miami/International Fellowship and a Co-Recipient of grants from the Miami Rhythm Foundation for Media Arts and the Cultural Council Foundation.

Current projects include a pilot for a children’s television program, Windows on the World shot on location in the Galapagos Islands and a newly released book Bright Moments In Jazz.