You are here: Home / Education / Events / Sports / Whitey Ford, ‘Chairman of the Board,’ dies by Mark Feinsand

Whitey Ford, ‘Chairman of the Board,’ dies by Mark Feinsand 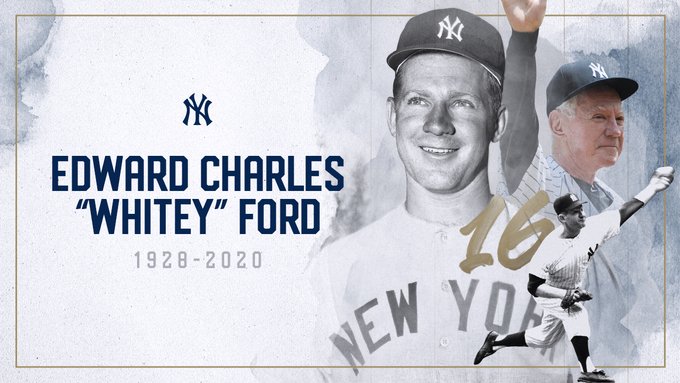 Whitey Ford, the Yankees’ all-time wins leader, Hall of Famer and six-time World Series champion, has died at the age of 91.

The Yankees announced Ford’s passing on Friday, 12 days shy of what would have been Ford’s birthday. They said he died on Thursday night, surrounded by family while watching the Yankees’ Division Series game against the Rays.

“Today all of Major League Baseball mourns the loss of Whitey Ford, a New York City native who became a legend for his hometown team,” Commissioner Rob Manfred said. “Whitey earned his status as the ace of some of the most memorable teams in our sport’s rich history. Beyond the Chairman of the Board’s excellence on the mound, he was a distinguished ambassador for our National Pastime throughout his life. I extend my deepest condolences to Whitey’s family, his friends and admirers throughout our game, and all fans of the Yankees.” to read more go to the link below: