You are here: Home / Education / Politics / US Politics / The 2021 Lie of the Year: Lies about the Jan. 6 Capitol Attack and its significance by Angie Drobnic Holan, Bill McCarthy, and Amy Sherman

The 2021 Lie of the Year: Lies about the Jan. 6 Capitol Attack and its significance by Angie Drobnic Holan, Bill McCarthy, and Amy Sherman 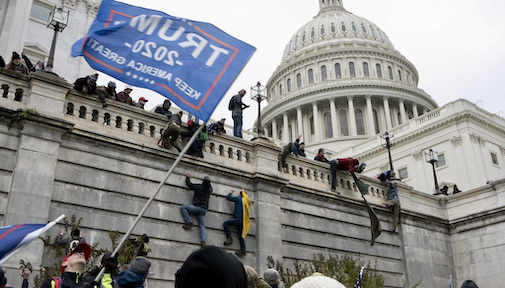 ANNOUNCING: PolitiFact’s 2021 Lie of the Year

Shortly after 2 p.m. on Jan. 6, supporters of President Donald J. Trump breached the U.S. Capitol, turning the seat of American democracy into the scene of an unforgettable crime.

Inside, lawmakers had been preparing to count the Electoral College votes that would bring Trump’s presidency to a close. Outside, the rioters erected hanging gallows. They waved “Trump 2020,” “Blue Lives Matter” and Confederate flags. Some were armed.

After marching down Pennsylvania Avenue at Trump’s urging, the rioters had overwhelmed police surrounding the Capitol. They pushed past them, stripped them of their weapons, dragged them to the ground, sprayed them with chemical irritants, beat them, bludgeoned them, or tased them.

Through clouds of smoke, they broke down barricades. They scaled the walls. They shattered windows. The congressional staff took cover in offices and closets, piling furniture against doors as the crowd snaked through the building’s historic hallways. The rioters forced their way into House Speaker Nancy Pelosi’s office. They entered the Senate chamber. They reached the dais, where Vice President Mike Pence had sat moments earlier.  To read more go to the link below: