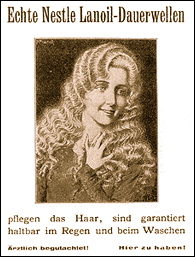 From 1901 until 2000, transformations of costumes were of an astonishing variation, covering almost all the possible options: from the classic Victorian elegance, to the long-haired hippies of the 60’s, until all the possibilities that our imagination could embrace: punk, rastafari, skinheads, etc. The industrial and technological achievements, not seen before in History, so fast and with no interruption, were reflected in different hairstyles along the century.

But it’s important to remark that, in the 20th century – and until today-, who defines the styles, the “fashion” symbols, are not more the princes or the noblesse, the aristocrats. The new phenomenon, the cinema, first the silent movies and later the talking movies, creates, in its massive and popular penetration, new models: the movie artists. From now, they will be the ones who dictate the mode and the tendencies; people will imitate their hair styles, dressings, and their behaviors and costumes.

The Invention of Perm: 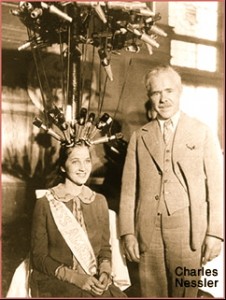 At the first years of the century , women’s hair was still relatively long and usually waved. The best method to wave the hair was the one invented by Marcel Grateau, with a hot curly iron which only worked on long hairs. As women started soon to use shorter hairstyles, a new method was necessary to wave the hair. The first method for a permanent wave was the one created by the German hairstylist Karl Nessler (later Charles Nestle), in 1905. He patented in 1906 the system in Germany, which consisted in a group of rollers in which the hair was wrapped and curled, connected to a machine what heated them by means of an electrical resistance. Hot rollers were kept far from the scalp by a complex of countering weights. In the first step was applied sodium hydroxide (caustic soda) and the hair was heated for several hours. All the process took 6 hours to be completed. Nessler tried in a first instance his method in Paris with a woman, Katharina Laible, to whom he burnt the hair and the scalp twice. After that, he married with her. In 1915 Nessler traveled to United States, discovering hundreds of falsifications of his patent on there. Then, he opened beauty salons in New York, patenting the system again, improved, and under the American laws.

During the first decade of the century, hairstyles were pretty similar to those of the former century: were still in use the “Marcel Wave” and the “Gibson Girl” hairstyle. The hair’s revolution arrived after the First World War. Women started to use short hair, about the earlobes-length, which was a real innovation. This style reflected the “New American Woman”: a busy, active woman, more independent, and liberated of old social structures. This hairstyle was called