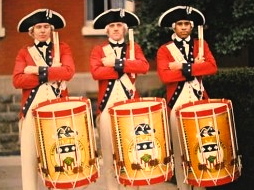 1. There were Blacks drummers present in many of the Revolution forces on both American and British sides.

2. This is one of the man Black Drummers who served with French Regiment during the Revolutionary War.

4. Black Pilot Eugene Bullard flew iwth the Frence Escadrille Spad 93, a Spad-equipped Squadron in the crack Groupe Brocard. The above photo shows the type of aircraft he flew.

5. Captain W.D. Nabors, was a trooper in the 9th and 10th Cavalry in Mexico. he was a 2nd Lt. of the 366th Infantry in France during World War I Here, he is serving as Captain of a Black Engineer Task Force sailing to Liberia May, 1942.