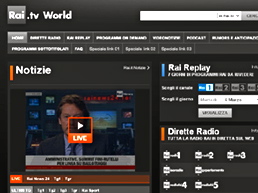 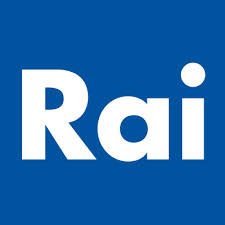 RAI operates a large number of television channels and radio stations, broadcasting via digital terrestrial transmission (15 television and 7 radio channels nationwide) and from several satellite and IPTV platforms. It is the biggest country broadcaster and competes with Mediaset, Telecom Italia Media, and Sky Italia – as well as commercial radio networks. RAI has a relatively high television audience share of 42.3%.

Half of RAI’s revenues come from broadcast receiving licence fees, the rest from the sale of advertising time.

In 1950, RAI became one of the 23 founding broadcasting organizations of the European Broadcasting Union. 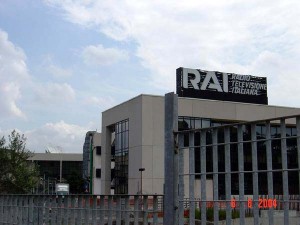 The Unione Radiofonica Italiana (URI) was formed in 1924 with the backing of the Marconi Company following a model adopted in other European countries. URI made its inaugural broadcast — a speech by Benito Mussolini at Teatro Costanzi — on 5 October. Regular programming began the following evening, with a quartet performing Haydn‘s Quartet No. 7 in A major from the Palazzo Corradi. At 21.00 CET, Ines Donarelli Viviani announced for the first time: “URI—Unione Radiofonica Italiana Rome station 1RO 425 meters wavelength. To all those who are listening our greetings, good evening.”  Guglielmo Marconi‘s S.A. Radiofono—Società Italiana per le Radiocomunicazioni Circolari (Radiofono) held 85% of URI shares and Western Electric‘s Società Italiana Radio Audizioni Circolari (SIRAC) held the remaining 15%.

Under the provisions of Royal Decree No. 1067 of 8 February 1923, wireless broadcasting became a state monopoly under the control of the Ministry of Posts and Telegraphs; URI was commissioned to provide services for a minimum of six years pursuant to Royal Decree No. 2191 of 14 October 1924 “Concessione dei servizi radioauditivi circolari alla Società Anonima Unione Radiofonica Italiana.” However, when URI’s contract expired in 1927, it was succeeded under Royal Decree Law No. 2207 of 17 November 1927 by the partially nationalised Ente Italiano per le Audizioni Radiofoniche (EIAR), which beaome Radio Audizioni Italiane S.p.A.(RAI) with investment from Società Idroelettrica Piemontese (SIP) in 1944.

During the reconstruction following World War II, much of RAI’s early programming was influenced by the “Reithian” style of the BBC. The emphasis was on educational content. Programs like Non è mai troppo tardi and Un viaggio al Po introduced people to what life was like in other parts of the country, at a time when most people couldn’t afford to travel. 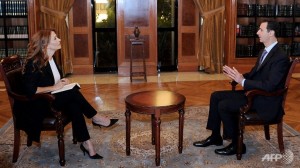 Start of the Television Service

In 1954 the state-owned holding company Istituto per la Ricostruzione Industriale (IRI) became the sole shareholder and RAI – now renamed RAI—Radiotelevisione italiana to reflect its extended responsibilities – finally began a regular television service. On 3 January at 11.00 CET, the first RAI television announcer presented the day’s schedule, which was broadcast from the service’s Milan headquarters and relay stations in Turin and Rome. At 14.30, the first regular programme in Italian television history was broadcast:Arrivi e partenze, hosted by Armando Pizzo and Mike Bongiorno. The evening’s entertainment was a theatre performance, L’osteria della posta, written by Carlo Goldoni. 23.15 saw the start of the day’s concluding programme, La Domenica Sportiva – the first edition of a weekly series which continues to this day.

In 2005, the government of Silvio Berlusconi proposed partial privatization of RAI by selling 20% ownership. This proposal was very controversial, in part because Berlusconi was the head of the leading private broadcaster Mediaset. Some critics claimed that Mediaset could become the buyer and thus increase its dominant position. However, after the revelation that RAI would lose €80m ($96m, £54m) in 2006, the privatization plan was suspended in October 2005. 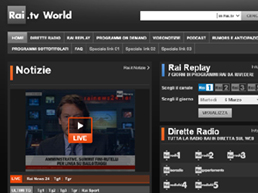 RAI is governed by a nine member Administrative Council. Seven of members are elected by a committee of the Italian Parliament. The other two (one of which is the President) are nominated by the largest shareholder: the Ministry of Economic Development. The Council appoints the Director-General. The Director-General and the members of the Administrative Council are appointed for a renewable three year term.