You are here: Home / Events / Occupy Groups / Protests Erupt Across The Country

Protests Erupt Across The Country 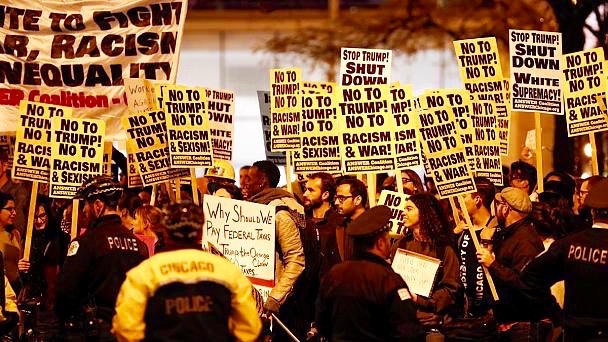 Protests Erupt Across America After Donald Trump’s Victory – Protests are erupting across the country after Donald J. Trump’s shocking victory. Protesters in Portland, California, New York and other parts of the country burnt flags, blocked bridges and demonstrated against the victory of Donald Trump. Trump defeated Hillary Clinton in the presidential elections.

Protests erupt across the country against President-elect Donald Trump

Hundreds of fired-up people marched from the Plaza to City Hall Wednesday accompanied by police. The group was protesting the election of Donald Trump as president. They chanted, “Not my president” and filled the steps of City Hall, where people expressed their feelings peacefully. Jill Toyoshiba The Kansas City Star by Greg Hadley

In cities and on college campuses across the U.S., protesters took to the streets, chanting, carrying signs and flags and angrily voicing their displeasure with the election of Republican Donald Trump to the presidency.

Local media outlets broadcast video Wednesday night showing a peaceful crowd in front of the downtown hotel. Many chanted “No racist USA, no Trump, no KKK.”

Another group stood outside the White House. They held candles, listened to speeches and sang songs.

In New York, over a thousand protesters marched in the streets of Manhattan and demonstrated outside Trump Tower.

One group began at Union Square, while another converged at Columbus Circle. The demonstrators then took to the streets blocking traffic as police mobilized to contain them under a light rain.

The protesters chanted “Not my president” and “hey, hey, ho, ho Donald Trump has got to go.” They held signs that read “Trump Makes America Hate” and “Don’t Lose Hope.”

Some of the protesters cursed out key battleground states that Trump had won to secure victory.

Outside Trump Tower on Fifth Avenue in midtown police installed barricades to keep the demonstrators at bay.

In Oakland, violence broke out late Tuesday night into Wednesday morning, as some demonstrators set garbage bins on fire, broke windows and sprayed graffiti at five businesses in the downtown area, police said. No arrests were made.