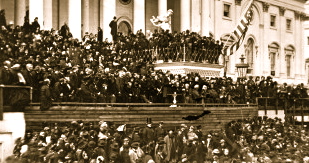 See the link above on this date March 7, 2015 the National Park Service and the Lincoln Group of D.C. hosted a commemorative ceremony at the Lincoln Memorial for the 150th anniversary of President Lincoln’s second inaugural address. The March 4, 1865, address from the east front of the U.S. Capitol was his last major speech before his assassination. The ceremony included speeches and a re-enactment of Lincoln’s address and oath. Ceremonies included the Army Color Guard and music by the U.S. Marine Band Brass Quintet, Washington Performing Arts’ Children of the Gospel Choir, and Civil War musician Bobby Horton.