In the Sport in the city series, we show how different stories connect with each other through sport and become part of the city’s routine. Meet Guilherme Levy Benathar, in love with Rio and rowing.

Official logo of the 2016 Summer Olympics.
For more details, see section “Logo” below.

The 2016 Summer Olympics (Portuguese: Jogos Olímpicos de Verão de 2016), officially known as the Games of the XXXI Olympiad (Jogos da XXXI Olimpíada), is a major international multi-sport event due to be celebrated in the tradition of the Olympic Games, as governed by the International Olympic Committee (IOC). The host city of the Games will be Rio de Janeiro, Brazil, announced at the 121st IOC Session held in Copenhagen, Denmark, on October 2, 2009. They are scheduled to be held from August 5 to 21, 2016, making these the second Summer Olympics to be held during the host city’s winter (the first was the Sydney 2000 Olympics, whose first week was held during the Southern Hemisphere‘s winter).  There will be 30 competition venues mainly in Barra da Tijuca, but also in three other zones: Copacabana, Deodoro, and Maracanã. It will mark the first time a South American city hosts the event, the third to host in the Southern Hemisphere, and also the first time a Portuguese speaking country hosts the event.  These will be the first Summer Olympic Games since the Sydney 2000 Olympics to not be held in the host nation’s capital city.

The bidding process for the 2016 Summer Olympic Games was officially launched on May 16, 2007.  The first step for each city was to submit an initial application to the International Olympic Committee (IOC) by September 13, 2007, confirming their intention to bid. Completed official bid files, containing answers to a 25-question IOC form, were to be submitted by each applicant city by January 14, 2008. Four candidate cities were chosen for the shortlist on June 4, 2008: Chicago,Madrid, Rio de Janeiro, and Tokyo (which hosted the 1964 Summer Olympics). The IOC did not promote Doha to the Candidature phase, despite scoring higher than selected candidate city Rio de Janeiro, due to their intent of hosting the Olympics in October, outside of the IOC’s sporting calendar. Prague and Baku also failed to make the cut.

Nawal El Moutawakel of Morocco headed the 10 member Evaluation Commission, having also chaired the evaluation commission for the 2012 Summer Olympics bids. The commission made on-site inspections in the second quarter of 2009. They issued a comprehensive technical appraisal for IOC members on September 2, one month before elections.

There are many restrictions barring the bidding cities from communicating with or influencing directly the 115 voting members. Cities cannot invite any IOC members to visit them and they cannot send them anything that can be construed as a gift. However, bidding cities invest large sums in their PR and media programs in an attempt to indirectly influence the IOC members by garnering domestic support, support from sports media and general international media. Jon Tibbs, a consultant on the Tokyo bid, was recently quoted as saying “Ultimately, you are communicating with just 115 people and each one has influencers and pressure groups but you are still speaking to no more than about 1,500 people, perhaps 5,000 in the broadest sense. It is not just about getting ads out there but it is about a targeted and very carefully planned campaign.”

The final voting was held on October 2, 2009, in Copenhagen with Madrid and Rio de Janeiro perceived as favourites to land the games. Chicago and Tokyo were eliminated after the first and second rounds of voting, respectively, while Rio de Janeiro took a significant lead over Madrid heading into the final round. The lead held and Rio de Janeiro was announced as host, becoming the first city in South America to host an Olympic games.

On June 26, 2011 it was reported on AroundTheRings.com that Roderlei Generali, the COO of the Rio de Janeiro Organizing Committee for the Olympic Games, resigned just one year after taking the job at ROOC. This comes just five months after CCO Flávio Pestana quit for personal reasons.  Pestana withdrew later during the 2012 Summer Paralympics. Renato Ciuchin was then appointed as COO.

Venues and infrastructure – Venues of the 2016 Summer Olympics 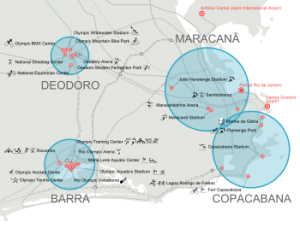 Map of Rio de Janeiro showing the competition venues for the 2016 Summer Olympics.

Besides the Maracanã Stadium and Engenhão, the footballmatches will also take place in Salvador (Arena Fonte Nova),São Paulo (Estádio do Morumbi), Belo Horizonte (Estádio Mineirão) and Brasília (Estádio Nacional de Brasília). All of these stadiums will also be used in the 2014 FIFA World Cup.

Since the award of the 2016 Olympics to Rio de Janeiro, the city’s crime problems have received more attention. A police helicopter was shot down over a favela during one of the city’s many drug wars, and the pilot was killed in the incident.  Rio’s mayor has admitted that there are “big issues” facing the city in securing the games from violence. However, he also states that such concerns and issues were presented to the IOC throughout the bidding process. The governor of the state of Rio de Janeiro also highlighted the fact that London faced security problems with a terrorist attack occurring on the day following the IOC session that chose the city to host the 2012 Olympic Games.

The IOC, however, has expressed optimism with allowing the city and the nation of Brazil to address these concerns.  Seven years is enough time for Rio de Janeiro to clean up its crime problem the IOC says. IOC spokesman Mark Adams told The Associated Press “we have confidence in their capacity to deliver a safe Games in seven years.” “Security is of course a very important aspect of any Olympic Games no matter where it is in the world. This is of course entirely under the national, regional and city authorities.”  Luiz Inácio Lula da Silva, former president of Brazil, has noted that the city has hosted other high-profile events without major incident, for example the 2007 Pan American Games.

Rio de Janeiro is planning to pacify local neighbourhoods or favelas. Community-based Police Pacification Units (UPPs) will be used to combine trust-building in individual communities, through the use of street patrols and civic work.  Moreover, in the state of Rio de Janeiro, homicides have fallen to the lowest level since 1991, indicating the success of Brazil’s “pacification” project implemented for the 2014 World Cup and the 2016 Summer Olympics.  The Regional Institute of Public Safety reported that the homicide rate of Rio de Janeiro for the first five months of 2012 was at its lowest in the past 21 years, with 10.9 homicides for every 100,000 habitants.  Nonetheless, despite the decline in homicides and human rights abuses, the Human Rights Watch urged Brazil to investigate extrajudicial killings.

On June 11, 2010, the federal government launched a program to protect the tenders for work in preparation for the 2014 World Cup and the 2016 Olympic Games against the possibility of fraud. The plan, known as Jogando Limpo (Fair Playing or Playing It Clean), includes a series of guidelines and nuggets of advice so that the government institutions, and also the tax authorities and common citizens themselves, may identify and denounce attempts at fraud against the tenders. The program, which was launched by the Ministries of Justice and of Sports, also plans the establishment of a group dedicating to monitoring tenders, to protect them against the threat of fraud and also to avoid delays in construction work.

This initiative, also boosted by the Office of the Comptroller General, also plans a campaign to make the people aware of the need to pay attention to possible fraud and to always denounce such cases. The program emphasizes measures against cartels and possible agreements between competing companies to set prices above market levels, in an attempt to raise the value of the contracts with the state. Minister for Justice Luiz Paulo Barreto lanched the programme in saying: “Nothing can be worse than someone taking advantage of these two great opportunities to commit crimes. This is a world phenomenon. The businesspeople could be entering with an agreement on prices, in order to compete in these tenders. This is something that needs to be tackled. We need to promote fair play also in our tenders. Fair play is something we would expect from a country intending to host events of this size.” He added that, between 2007 and 2010, there were a total of 265 search and seizure warrants issued in Brazil to tackle the crime of cartel formation. In the same period over 100 people were preventively arrested for the same crime, and currently an additional 251 people are being investigated.

There were two open spots for sports and initially seven sports began the bidding for inclusion in the 2016 program. Baseball and softball, which were dropped from the program in 2005, karate, squash, golf, roller sports, and rugby union all applied to be included. Leaders of the seven sports held presentations in front of the IOC executive board in June 2009.

In August, the executive board initially gave its approval to rugby sevens—a seven-man version of rugby union—by a majority vote, thus removing baseball, roller sports, and squash from contention. Among the remaining three—golf, karate, and softball—the board approved golf as a result of consultation. The final decision regarding the remaining two sports was made on October 9, 2009, the final day of the 121st IOC Session. A new system was in place at this session; a sport now needed only a simple majority from the full IOC committee for approval rather than the two-thirds majority previously required.  International Golf Federation executive director Antony Scanlon said that the top players, including Tiger Woods and Annika Sörenstam, would show their continued support of golf’s Olympic involvement by participating in the events.

In May 2012, the International Sailing Federation announced that windsurfing would be removed from the 2016 Olympic sailing programme and replaced by kitesurfing.  This decision was reversed in November.

In January 2013, representatives for the IOC announced that the commission would be forced to review the status of cycling events following Lance Armstrong‘s admission to the use of performance-enhancing drugs amid accusations that senior members of the Union Cycliste Internationale—the governing body of cycling—had participated in a cover-up of widespread blood doping within the sport.

In contrast to the exception during the 2012 Olympics, the International Gymnastics Federation announced that these Games will have a gala event for gymnastics.

The 2016 Summer Olympic program features 28 sports and a total of 41 disciplines.

The Official Paralympic emblem/logo was launched on November 26, 2011.