You are here: Home / Education / Politics / US Politics / Liz Cheney’s remarks on the House floor on the night before her expected removal from leadership post by CNN politics 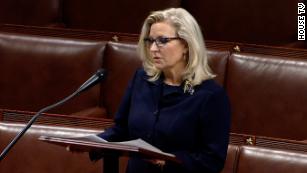 Rep. Liz Cheney, the No. 3 House Republican, gave a defiant speech on the floor of the US House of Representatives on the eve of a GOP conference meeting where Cheney is expected to be removed from her leadership position. Here are her remarks from Tuesday evening, provided by the Wyoming Republican’s office:”Madam Speaker, I rise tonight to discuss freedom and our constitutional duty to protect it. “I have been privileged to see first-hand how powerful and how fragile freedom is. 28 years ago, I stood outside a polling place, a schoolhouse in western Kenya. Soldiers had chased away people lined up to vote. A few hours later, the people began streaming back in, risking further attack, undaunted in their determination to exercise their right to vote.”In 1992, I sat across a table from a young mayor in Nizhny Novgorod, Russia and listened to him talk of his dream of liberating his nation from communism. Years later, for his dedication to the cause of freedom, Boris Nemtsov would be assassinated by Vladimir Putin’s thugs. To read more go to the link below: