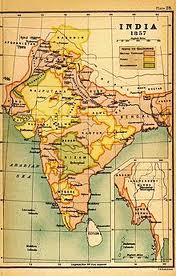 The history of India begins with evidence of human activity of Homo sapiens as long as 75,000 years ago, or with earlier hominids including Homo erectus from about 500,000 years ago.   The Indus Valley Civilization, which spread and flourished in the northwestern part of the Indian subcontinent from c. 3300 to 1300 BCE in present-day Pakistan and northwest India, was the first major civilization in South Asia.   A sophisticated and technologically advanced urban culture developed in the Mature Harappan period, from 2600 to 1900 BCE.  This Bronze Age civilization collapsed before the end of the second millennium BCE and was followed by the Iron Age Vedic Civilization, which extended over much of the Indo-Gangetic plain and which witnessed the rise of major polities known as the Mahajanapadas. In one of these kingdoms, Magadha, Mahavira and Gautama Buddha were born in the 6th or 5th century BCE and propagated their śramanic philosophies.

Most of the subcontinent was conquered by the Maurya Empire during the 4th and 3rd centuries BCE. It became fragmented, with various parts ruled by numerous Middle kingdoms for the next 1,500 years. This is known as the classical period of Indian history, during which time India has sometimes been estimated to have had the largest economy of the ancient and medieval world, with its huge population generating between one fourth and one third of the world’s income up to the 18th century.

Much of northern and central India was united in the 4th century CE, and remained so for two centuries, under the Gupta Empire. This period, witnessing a Hindu religious and intellectual resurgence, is known among its admirers as the “Golden Age of India“. From this time, and for several centuries afterwards, southern India, under the rule of the Chalukyas, Cholas, Pallavas, andPandyas, experienced its own golden age. During this period, aspects of Indian civilization, administration, culture, and religion (Hinduism and Buddhism) spread to much of Asia.

Kingdoms in southern India had maritime business links with the Roman Empire from around 77 CE. Muslim rule in the subcontinent began in 8th century CE when the Arab general Muhammad bin Qasim conquered Sindh and Multan in southern Punjab in modern day Pakistan,  setting the stage for several successive invasions from Central Asia between the 10th and 15th centuries CE, leading to the formation of Muslim empires in the Indian subcontinent such as the Delhi Sultanate and the Mughal Empire.

Mughal rule came from Central Asia to cover most of the northern parts of the subcontinent. Mughal rulers introduced Central Asian art and architecture to India. In addition to the Mughals and various Rajput kingdoms, several independent Hindu states, such as the Vijayanagara Empire, the Maratha Empire, Eastern Ganga Empire and the Ahom Kingdom, flourished contemporaneously in southern, western,eastern and northeastern India respectively. The Mughal Empire suffered a gradual decline in the early 18th century, which provided opportunities for the Afghans, Balochis, Sikhs, and Marathas to exercise control over large areas in the northwest of the subcontinent until the British East India Company gained ascendancy over South Asia. 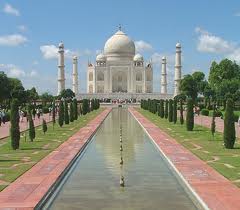 Beginning in the mid-18th century and over the next century, large areas of India were annexed by the British East India Company. Dissatisfaction with Company rule led to the Indian Rebellion of 1857, after which the British provinces of India were directly administered by the British Crown and witnessed a period of both rapid development of infrastructure and economic decline. During the first half of the 20th century, a nationwide struggle for independence was launched by the Indian National Congressand later joined by the Muslim League. The subcontinent gained independence from the United Kingdom in 1947, after the British provinces were partitioned into the dominions of India and Pakistan and the princely states all acceded to one of the new states.

The numbers of British in India were small, yet they were able to rule two-thirds of the subcontinent directly and exercise considerable leverage over the princely states that accounted for the remaining one-third of the area. There were 674 of the these states in 1900, with a population of 73 million, or one person in five. In general, the princely states were strong supporters of the British regime, and the Raj left them alone. They were finally closed down in 1947-48.

The first step toward Indian self-rule was the appointment of councillors to advise the British viceroy, in 1861; the first Indian was appointed in 1909. Provincial Councils with Indian members were also set up. The councillors’ participation was subsequently widened into legislative councils. The British built a large British Indian Army, with the senior officers all British, and many of the troops from small minority groups such as Gurkhas from Nepal and Sikhs. The civil service was increasingly filled with natives at the lower levels, with the British holding the more senior positions.

From 1920 leaders such as Mohandas Karamchand Gandhi began highly popular mass movements to campaign against the British Raj using largely peaceful methods. Some others adopted a militant approach that sought to overthrow British rule by armed struggle; revolutionary activities against the British rule took place throughout the Indian sub-continent. The Gandhi-led independence movement opposed the British rule using non-violent methods like non-cooperation, civil disobedience and economic resistance. These movements succeeded in bringing independence to the new dominions of India and Pakistan in 1947.