The history of Japan encompasses the history of the islands of Japan and the Japanese people, spanning the ancient history of the region to the modern history of Japan as a nation state. Following the last ice age, around 12,000 BC, the rich ecosystem of the Japanese Archipelago fostered human development. The earliest-known pottery belongs to the Jōmon period. The first known written reference to Japan is in the brief information given in Twenty-Four Histories in the 1st century AD. The main cultural and religious influences came from China.

The first permanent capital was founded at Nara in 710 AD, which became a center of Buddhist art, religion and culture. The current imperial family emerged about 700 AD, but until 1868 (with few exceptions) had high prestige but little power. By 1550 or so political power was subdivided into several hundred local units, or “domains” controlled by local “daimyō” (lords), each with his own force of samurai warriors. Tokugawa Ieyasu came to power in 1600, gave land to his supporters, set up his “bakufu” (military government) at Edo (modern Tokyo). The “Tokugawa period” was prosperous and peaceful, but Japan deliberately terminated the Christian missions and cut off almost all contact with the outside world. In the 1860s the Meiji Period began, and the new national leadership systematically ended feudalism and transformed an isolated, underdeveloped island country into a world power that closely followed Western models. Democracy was problematic, because Japan’s powerful military was semi-independent and overruled—or assassinated—civilians in the 1920’s and 1930’s. The military moved into China starting in 1931 but was defeated in the Pacific War by the United States and Britain.

Occupied by the U.S. after the war and stripped of its conquests, Japan was transformed into a peaceful and democratic nation. After 1950 it enjoyed very high economic growth rates, and became a world economic powerhouse, especially in automobiles and electronics. Since the 1990’s economic stagnation has been a major issue, with an earthquake and tsunami in 2011 causing massive economic dislocations.

Tensions were mounting with the U.S. as a result of public outcry over Japanese aggression and reports of atrocities in China, such as the infamous Nanjing Massacre. The U.S. strongly supported China with money, airmen, supplies and threats against Japan. In retaliation to the invasion of French Indochina the U.S. began an embargo on such goods as petroleum products and scrap iron. On July 25, 1941, all Japanese assets in the US were frozen. Because Japan’s military might, especially the Navy, was dependent on their dwindling oil reserves, this action had the contrary effect of increasing Japan’s dependence on and hunger for new acquisitions.

Many civil leaders of Japan, including Prime Minister Konoe Fumimaro, believed a war with America would end in defeat, but felt the concessions demanded by the U.S. would almost certainly relegate Japan from the ranks of the World Powers, leaving it prey to Western collusion. Civil leaders offered political compromises in the form of the “Amau Doctrine,” dubbed the “Japanese Monroe Doctrine” that would have given the Japanese free rein with regard to war with China. These offers were flatly rejected by the U.S.; the military leaders instead vied for quick military action.

Most military leaders such as Osami Nagano, Kotohito Kan’in, Hajime Sugiyama and Hideki Tōjō believed that war with the Occident was inevitable. They finally convinced the Emperor to sanction on November 1941 an attack plan against U.S., Great Britain and the Netherlands. However, there were dissenters in the ranks about the wisdom of that option, most notably Admiral Yamamoto and Prince Takamatsu. They pointedly warned that at the beginning of hostilities with the US, the Empire would have the advantage for six months, after which Japan’s defeat in a prolonged war with an enemy with a much larger economy would be almost certain.

The Americans were expecting an attack in the Philippines and sent bombers to deter Japan. On Yamamoto’s advice, Japan made the decision to attack the main American fleet at Pearl Harbor in Hawaii. American strategists believed that Japan would never be so bold as to attack so close to its home base, and the US was taken completely by surprise.

The attack on Pearl Harbor, initially appeared to be a major success that knocked out the American battle fleet—but it missed the aircraft carriers that were at sea and ignored vital shore facilities whose destruction could have crippled US Pacific operations. Ultimately, the attack proved a long-term strategic disaster that actually inflicted relatively little significant long-term damage while provoking the United States to seek revenge. At the same time as the Pearl Harbor attack, the Japanese army attacked British Hong Kong and occupied it for nearly four years.

While Nazi Germany was in the middle of its Blitzkrieg through Europe, Japan was following suit in Asia. The Japanese Army invaded and captured most of the coastal Chinese cities such as Shanghai. Japan took over French Indochina (Vietnam, Laos, Cambodia), British Malaya (Brunei, Malaysia, Singapore) as well as the Dutch East Indies (Indonesia) while Thailand entered into an alliance with Japan. Japanese forces overwhelmed the British in Burma (thus cutting off supplies to China) and reached the borders of India and Australia. Its air raids devastated Darwin, Australia. Japan had soon established an empire stretching over much of the Pacific. 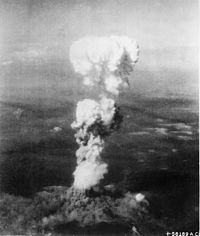 However as Admiral Yamamoto warned, Japan’s six-month window of military advantage following Pearl Harbor ended with the Japanese Navy’s offensive ability being crippled at the hands of the American Navy in the Battle of Midway, which established a significant American military advantage. The war became one of mass production and logistics, the U.S. funding a far stronger navy with more numerous warplanes, and a superior communications and logistics system. The Japanese had stretched too far and were unable to supply its forward bases—many soldiers died of starvation. American submarines destroyed the Japanese tankers, causing a severe shortage of fuel oil for ships and aviation gasoline. Japan built warplanes in large quantity but the quality plunged, and the performance of poorly trained pilots spiraled downward.   The Navy lost a series of major battles, from Midway (1942) to the Philippine Sea (1944) and Leyte Gulf (1945), which put American long-range B-29 bombers in range. A series of massive raids burned out much of Tokyo and other major industrial cities beginning in March 1945 while Operation Starvation seriously disrupted the nation’s vital internal shipping lanes. Regardless of how the war was becoming hopeless, the circle around the Emperor held fast and refused to open negotiations. Finally in August, two atomic bombs and the Soviet invasion of Manchuria demonstrated the cause was futile, and Hirohito authorized a surrender whereby he kept his throne.

Total Japanese military fatalities between 1937 and 1945 were 2.1 million; most came in the last year of the war. Starvation or malnutrition-re­lated illness accounted for roughly 80 percent of Japanese military deaths in the Philippines, and 50 percent of military fatalities in China. The aerial bombing of a total of 65 Japanese cities appears to have taken a minimum of 400,000 and possibly closer to 600,000 civilian lives (over 100,000 in Tokyo alone, over 200,000 in Hiroshima and Nagasaki combined, and 80,000–150,000 civilian deaths in the battle of Okina­wa). Civilian death among settlers who died attempting to re­turn to Japan from Manchuria in the winter of 1945 were probably around 100,000.