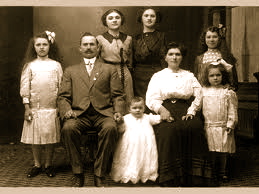 Preview of Documentary. An inspiring look at Detroit’s Polish culture. It tracks Polish Americans through the most tragic moments in their cultural history and revels in their greatest triumphs. 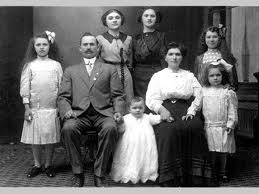 The first Poles in North America came to the Jamestown colony in 1608, twelve years before the Pilgrims arrived in Massachusetts.   These early settlers were brought as skilled artisans by the English soldier–adventurer Captain John Smith, and included a glass blower, a pitch and tar maker, a soap maker and a timberman.   The skills of these Polish colonists, who included Michał Łowicki, Zbigniew Stefański, Jan Bogdan, Jan Mata, and Stanisław Sadowski, were vital to the new settlement, as the House of Burgesses ultimately recognized when it met in 1619. During its deliberations, the House excluded the Polish community from voting rights. In reaction, the Poles launched the first recorded strike in the New World.   In need of their industries, the House of Burgesses extended the “rights of Englishmen” to the Poles (which included some East Prussians.) Subsequently, the Poles established the first bilingual schools in the New World, teaching both Polish and English and later extending the curriculum to include Latin and German.   The political and economic power of the Polish community declined, however, with the increased colonial warfare with Native Americans. 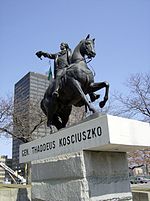 Later Polish immigrants included Jakub Sadowski, who in 1770, settled in New York with his sons—the first Europeans to penetrate as far as Kentucky. It is said that Sandusky, Ohio, was named after him.   At the time, the Polish state was failing and being gradually stripped of its independence due to military partitions by foreign powers, a number of Polish patriots, among them Kazimierz Pułaski and Tadeusz Kościuszko, left for America to fight for American Independence.

Kazimierz Pułaski, having led the losing side of a civil war, escaped a death sentence by leaving for America. There, he served as Brigadier-general in the Continental Army and commanded its cavalry.   He saved General George Washington‘s army at the Battle of Brandywine and died leading a cavalry charge at the Battle of Savannah, aged 31.  Pułaski later become known as the “father of American cavalry.”  He is also commemorated in Casimir Pulaski Day and the Pulaski Day Parade.

Kościuszko was a professional military officer who served in the Continental Army in 1776 and was instrumental in the victories at the Battle of Saratoga and West Point.  After returning to Poland, he led the failed Polish insurrection against Russia which ended with the Partition of Poland in 1795.   Pułaski and Kościuszko both have statues in Washington, D.C. 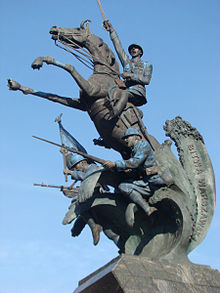 During the Partitions of Poland (1795–1918), the Polish nation was forced to define itself as a disjointed and oppressed minority within three neighboring empires: Russian, Prussian and Austrian. The Polonia community in the United States, however, was founded on a unified national culture and society. Consequently, it assumed the place and moral role of the fourth province.

The largest wave of Polish immigration to America occurred in the early 20th century. Officially, more than 1.5 million Polish immigrants were processed at Ellis Island, between 1899 and 1931. In addition, many Polish immigrants arrived at the port of Baltimore. The actual numbers of ethnically Polish arrivals at that time would be difficult to estimate due to prolonged occupation of Poland by neighboring states, with total loss of its international status. Similar circumstances developed in the following decades: during the Nazi German occupation of Poland in World War II; and further, in the communist period, under the Soviet military and political dominance with re-drawn national borders.

Many Poles also emigrated to America following numerous national uprisings against the three partitioners of Poland: Prussia, Russia, and Austria. One of them was a doctor of medicine and a soldier, Felix Wierzbicki, a veteran of the November Uprising. In 1849, he published in San Francisco the first English-language book printed in California, “California As It Is and As It May Be.”   The book is an “unvarnished” description of the culture, peoples, and climate of the area at that time. Wierzbicki described prospective settlers and included a survey of agriculture and hints on gold mining.

Between 1870 and 1914, more than 3.6 million people departed from Polish territories (of whom 2.6 arrived in the U.S.) Serfdom was abolished in Prussia in 1808, in the Austro-Hungarian Empire in 1848 and in Czarist Russia, in 1861. In the late 19th century, the beginnings of industrialization, commercial agriculture and a population boom, that exhausted available land, transformed Polish peasant-farmers into migrant-laborers. Racial discrimination and unemployment drove them to emigrate.

Initially, the Polish emigrants to America came mainly from the German part of the partitioned Poland, where they were targeted by Bismarck‘s official policy of anti-Catholic Kulturkampf. Only after 1900, the Prussian Poles were outnumbered by immigrants from Austrian and Russian Poland. 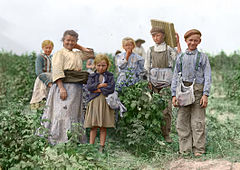 Polish immigrants working on the farm, 1909.

Also, the Russian section of the partition, Congress Poland, was undergoing considerable industrialization, particularly the textile capital of Łódź, the Manchester ofImperial Russia and the iron-foundries of Piotrków Trybunalski. The decline of these areas, after the Russo-Japanese War and the 1905 Russian Revolution, led to a mass exodus of laborers, first to Germany, Denmark and France, then eventually to the U.S., Canada, Brazil and Argentina. At its peak, in 1912–1913, annual emigration to the U.S., from the Polish provinces of the Russian Empire, exceeded 112,345 (including large numbers of Jews, Lithuanians and Belarusians).

In the Polish provinces of Austrian Galicia, chiefly rural, but with laborers in the mines and factories of Bohemia, Silesia, Moravia and Lower Austria, land shortages, crop failures and the loosening of travel restrictions led to another exodus, mainly to Germany, Austria proper, France and the United States.   The 1910 United States Census recorded more than 900,000 new immigrants, who spoke Polish.

According to the 2000 United States Census, 667,414 Americans of age 5 years and older, reported Polish as the language spoken at home, which is about 1.4% of people who speak languages other than English or 0.25% of the U.S. population. 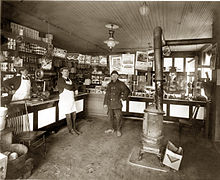 Lopata (1976) argues that Poles differed from most ethnics in America, in several ways. First, they did not plan to remain permanently and become “Americanized”. Instead, they came temporarily, to earn money, invest, and wait for the right opportunity to return. Their intention was to ensure for themselves a desirable social status in the old world. However, many of the temporary migrants had decided to become permanent Americans.

Following World War I, the reborn Polish state began the process of economic recovery and many Poles tried to return. Since all the ills of life in Poland could be blamed on foreign occupation, the migrants did not resent the Polish upper classes. Their relation with the mother country was generally more positive than among migrants of other European countries. It is estimated that 30% of the Polish emigrants from lands occupied by the Russian Empire returned home. The return rate for non-Jews was closer to 50–60%. More than two-thirds of emigrants from Polish Galicia (freed from under the Austrian occupation) also returned.