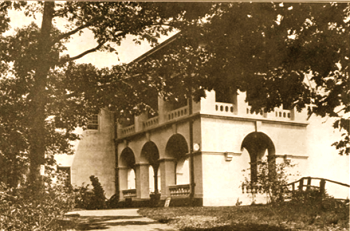 Eagle Rock Reservation is a 408.33-acre tract of wooded land located in the central section of Essex County on the crest of Watchung’s First Mountain.  The mountain got its name in the early 19th century, when bald eagles were said to nest in the rocky cliffs on the eastern edge.  The reservation is primarily undeveloped, and is laced with bridle paths and hiking trails.  Lookout Point provides visitors with a spectacular view of the New York skyline

The first purchase of land took place in 1895, and the entire tract was finally assembled in 1907.  Frederick Law Olmsted created a preliminary design for the reservation which was further developed by the Olmsted Firm in the early 1900’s.

A historic structure that sat on the crest is the old casino built in 1911. This was an open masonry shelter with a series of arches.  It has since been transformed into the Highlawn Pavilion restaurant.  This saved the structure, which had been subject to vandalism and slated for demolition.  (The term “casino” refers to an Italian style county dwelling or summer house.)

In 1894, the trolley line to the foot of Eagle Rock Avenue had been placed in operation. This line was an extension of the Washington Street end of the Orange Crosstown and ran via Washington Street to its own right-of-way along what are now Watchung Avenue, Chestnut Street, Oxford Place, and Cherry Street to Harrison Avenue and via that street to its intersection with Eagle Rock Avenue.  The idea behind the construction of the Eagle Rock line was to provide cheap transportation to Eagle Rock, which had become a Mecca for Sunday picnickers because of its high elevation and magnificent view of the growing metropolitan area. The promoters of the Eagle Rock line realized the impracticality of running a trolley to the top of the ridge because of the excessive grade. Instead, they counted upon their patrons’ climbing the last hundred feet up a zigzag path constructed along the side of the cliff.

The park was a famous spot where week-enders congregated.  Visitors would travel by trolley from New York, transfer in Newark, take another trolley via the Orange line to Harrison Avenue where passengers either walked up the mountain to the top or transferred to the Eagle Rock line.

Automobile enthusiasts of that period held races up the cobblestone roadway of Eagle Rock Avenue terminating in Eagle Rock Park.