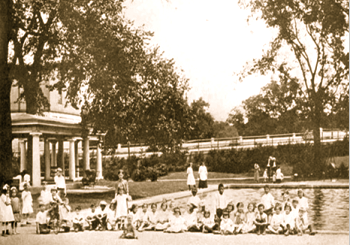 Glenfield is a 20.01-acre park located in the central section of Essex County in Montclair, with a small corner extending into Glen Ridge. It is the thirteenth in size in the county park system, and is bordered by Maple, Woodland, and Bloomfield Avenues. Glenfield serves as a community park and most of the users walk to it from the surrounding neighborhoods. The original acreage was given to the Essex County Park Commission by the Town of Montclair in 1910 and the park was designed by the Olmsted Brothers firm.

Acquisition of this land by the County preserved a rare bit of wildlife habitat in the midst of a bustling metropolis. While the bulk of the land was transformed into the usual recreational activities, in the southeastern corner of the park Toney’s Brook forms a picturesque glen with natural streamside vegetation. This creates a habitat favorable to a variety of wildlife, including several species of songbirds. The glen has been an educational resource in environmental education programs. The thick vegetation along Toney’s Brook also aids in buffering the traffic noise from Bloomfield Avenue.

The 1960’s and 70’s brought increased recreational demands from the changing neighborhood and a community center was established in the park in 1974.