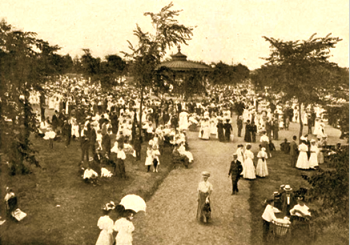 Branch Brook Park is distinguished by being the first county park to be opened for public use in the United States. It has been placed on both the New Jersey (1980) and National (1981) Registers of Historic Places.

Located in the City of Newark and bordered at the southern end by U.S. Route 280, the park crosses Bloomfield Avenue, Park Avenue, and Heller Parkway, terminating near the Newark/Belleville line. The park is nearly 4 miles long and averages 1/4 mile in width. At 359.72 acres, it is the largest developed park in the County. It is featured by a combination of open meadowland and small patches of woodland on gently rolling terrain.

Named for a branch brook that flowed through the valley into the Passaic River, the stream that remains, and much of the surrounding landscape, still retain a natural appearance. More than 2,000 cherry trees that blossom during April are greater both in variety and number than the famed Washington, D.C., display the result of a 1927 gift from the Bamberger and Mrs. Felix Fuld family. At its height the Cherry Blossom Festival attracts over 10,000 people a day.

In 1895, the same year the New Jersey State Legislature authorized creation of the Essex County Park Commission, a former Civil War Army training ground was dedicated to “park use.” A large part of the land was a dismal marsh known as Old Blue Jay Swamp. To add to the dismal air of the swamp, bleak, unhealthy tenements crowded in on parts of the area. The swamp water was used for both drinking and sewage disposal.

In sharp contrast, the southern portion of the proposed park contained a circular reservoir basin that supplied clean, fresh water to a “private” association of Newark citizens. In July of 1895 the City of Newark transferred approximately 60 acres of this land to the Essex County Park Commission, at a cost of $350,687. “Reservoir Park” became the nucleus of Branch Brook Park.

Additional acquisitions extending the park northward were aided by the generosity of “several public spirited Newark families,” such as the Ballantine Family who donated 32 acres of their property. Another 50 plus acres were given by Z.M. Keene, William A. Righter and Messrs. Heller. The Park doubled in size through acquisitions and purchases between 1924 and 1929. Branch Brook Park, the first county park in the United States, became one of the largest “city” parks in the country.

The public contributed in 1898 by voting a 1.5 million dollar appropriation for the continuation of construction work begun in 1895. Old Blue Jay Swamp was transformed into a lake, flower gardens, and expanses of lawns by 1900. The firm of John Bogart and Nathan F. Barrett had

been hired in 1895, to provide plans and advise for development of the park. Their design was romantic in style, and was dominated by geometrical patterned gardens and arbors.

In 1898, Robert Ballantine presented the park with a handsome beaux-arts entrance gateway erected at the corner of Lake Street and Ballantine Parkway. In 1900, the cornerstone for the

Cathedral of the Sacred Heart was laid and in the same year, the firm of Frederick Law Olmsted was retained to revise the original plans for the park. It was refined into more naturalistic lines with gracefully curving paths and roadways. One of the outstanding aspects of the design was the concert area in the southern portion bordering Branch Brook Lake. Directly across the lake on a projection of land known as Meeker Mound, the Olmsted firm built an octagonal gazebo. The first greenhouse was constructed in 1910.