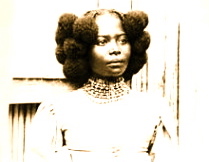 A hairstyle, hairdo, or haircut refers to the styling of hair, usually on the human scalp. The fashioning of hair can be considered an aspect of personal grooming, fashion, and cosmetics, although practical, cultural, and popular considerations also influence some hairstyles. 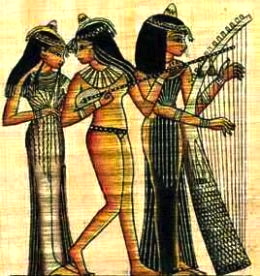 Throughout times, people have worn their hair in a wide variety of styles, largely determined by the fashions of the culture they live in. Hairstyles are markers and signifiers of social class, age, marital status, racial identification, political beliefs and attitudes about gender.

In many cultures, often for religious reasons, women’s hair is covered while in public, and in some, such as Haredi Judaism or European Orthodox communities, women’s hair is shaved or cut very short, and covered with wigs. Only since the end of World War I have women begun to wear their hair short and in fairly natural styles.

The Venus of Brassempouy – Paleolithic

The oldest known reproduction of hair braiding lies back about 30,000 years: the Venus of Willendorf, now known in academia as the Woman of Willendorf, of a female figurine from the Paleolithic, estimated to have been made between about 28,000 and 25,000 BCE. The Venus of Brassempouy counts about 25,000 years old and shows undisputably hairstyling. 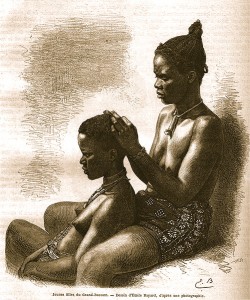 In Bronze Age razors were known and in use by some men, but not on a daily basis since the procedure was rather unpleasant and required resharpening of the tool which reduced its endurance.

In ancient civilizations, women’s hair was often elaborately and carefully dressed in special ways. Women coloured their hair, curled it, and pinned it up(ponytail) in a variety of ways. They set their hair in waves and curls using wet clay, which they dried in the sun and then combed out, or else by using a jelly made of quince seeds soaked in water, or curling tongs and curling irons of various kinds.

Between 27 BC and 102 AD, in Imperial Rome, women wore their hair in complicated styles: a mass of curls on top, or in rows of waves, drawn back into ringlets or braids. Eventually noblewomen’s hairstyles grew so complex that they required daily attention from several slaves and a stylist in order to be maintained. The hair was often lightened using wood ash, unslaked lime and sodium bicarbonate, or darkened with copper filings, oak-apples or leeches marinated in wine and vinegar. It was augmented by wigs, hairpieces and pads, and held in place by nets, pins, combs and pomade. Under the Byzantine Empire, noblewomen covered most of their hair with silk caps and pearl nets.

From the time of the Roman Empire until the Middle Ages, most women grew their hair as long as it would naturally grow. It was normally little styled by cutting, as women’s hair was tied up on the head and covered on most occasions when outside the home with a snood, kerchief or veil; for an adult woman to wear uncovered and loose hair in the street was often restricted to prostitutes. Braiding and tying the hair was common. In the 16th century, women began to wear their hair in extremely ornate styles, often decorated with pearls, precious stones, ribbons and veils. Women used a technique called “lacing” or “taping,” in which cords or ribbons were used to bind the hair around their heads. During this period, most of the hair was braided and hidden under wimples, veils or couvrechefs. In the later half of the 15th century and on into the 16th century a very high hairline on the forehead was considered attractive, and wealthy women frequently plucked out hair at their temples and the napes of their necks, or used depilatory cream to remove it, if it would otherwise be visible at the edges of their hair coverings. Working-class women in this period wore their hair in simple styles. 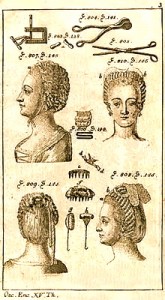 During the 15th and 16th centuries, European men wore their hair cropped no longer than shoulder-length, with very fashionable men wearing bangs or fringes. In Italy it was common for men to dye their hair. In the early 17th century male hairstyles grew longer, with waves or curls being considered desirable.

The male wig was supposedly pioneered by King Louis XIII of France (1601–1643) in 1624 when he had prematurely begun to bald.[14] This fashion was largely promoted by his son and successor Louis XIV of France (1638–1715) that contributed to its spread in European and European-influenced countries. The beard had been in a long decline and now disappeared among the upper classes.

Perukes or periwigs for men were introduced into the English-speaking world with other French styles when Charles II was restored to the throne in 1660, following a lengthy exile in France. These wigs were shoulder-length or longer, imitating the long hair that had become fashionable among men since the 1620’s. Their use soon became popular in the English court. The London diarist Samuel Pepys recorded the day in 1665 that a barber had shaved his head and that he tried on his new periwig for the first time, but in a year of plague he was uneasy about wearing it: 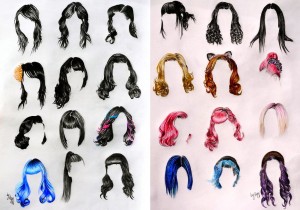 “3rd September 1665: Up, and put on my coloured silk suit, very fine, and my new periwig, bought a good while since, but darst not wear it because the plague was in Westminster when I bought it. And it is a wonder what will be the fashion after the plague is done as to periwigs, for nobody will dare to buy any haire for fear of the infection? That it had been cut off the heads of people dead of the plague.”

Late 17th-century wigs were very long and wavy (see George I below), but became shorter in the mid-18th century, by which time they were normally white (George II). A very common style had a single stiff curl running round the head at the end of the hair. By the late 18th-century the natural hair was often powdered to achieve the impression of a short wig, tied into a small tail or “queue” behind (George III).