You are here: Home / Education / Politics / US Politics / Former Secretary of State General Colin Powell dead at 84 of Covid-19 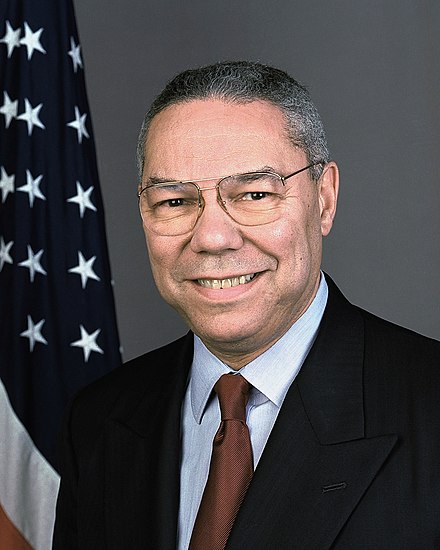 Purple Heart recipient Colin Powell was the first African-American chairman of the Joint Chiefs of Staff. Learn about his two tours of duty in Vietnam and his time working as Secretary of State under President George W. Bush in this video.

General Colin L. Powell, former U.S. Secretary of State and Chairman of the Joint Chiefs of Staff passed away this morning due to complications from Covid 19. He was fully vaccinated. We want to thank the medical staff at Walter Reed National Medical Center for their caring treatment. We have lost a remarkable and loving husband, father, grandfather, and a great American. The Powell FamilyPowell was one time a favorite to be President. He was later best known for his assertion in Congress that Iraq had weapons of mass destruction.

Colin Luther Powell (/ˈkoʊlɪn/; born April 5, 1937) is an American politician, diplomat, and retired four-star general who served as the 65th United States Secretary of State from 2001 to 2005. Powell was the first African-American Secretary of State. Prior to the election of Barack Obama as president in 2008, Powell and his successor, Condoleezza Rice, were the highest-ranking African Americans in the history of the federal executive branch (by virtue of the Secretary of State standing fourth in the presidential line of succession). Powell served as the 16th United States National Security Advisor from 1987 to 1989 and as the 12th Chairman of the Joint Chiefs of Staff from 1989 to 1993.

Powell was born in New York City in 1937 and was raised in the South Bronx. His parents, Luther and Maud Powell, immigrated to the United States from Jamaica. Powell was educated in the New York City public schools, graduating from the City College of New York (CCNY), where he earned a bachelor’s degree in geology. He also participated in ROTC at CCNY and received a commission as an Army second lieutenant upon graduation in June 1958. Powell was a professional soldier for 35 years, during which time he held many command and staff positions and rose to the rank of four-star general. He was Commander of the U.S. Army Forces Command in 1989. To learn more go to the link below: