You are here: Home / Education / Events / Sports / Elgin Baylor, Acrobatic Hall of Famer in N.B.A., Dies at 86 by Richard Goldstein

Elgin Baylor, Acrobatic Hall of Famer in N.B.A., Dies at 86 by Richard Goldstein 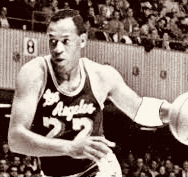 Elgin Baylor, the Lakers’ Hall of Fame forward who became one of the N.B.A.’s greatest players, displaying acrobatic brilliance that foreshadowed the athleticism of later generations of stars, died on Monday in Los Angeles. He was 86.

His death, at a hospital, was announced on Twitter by the Lakers. The team did not specify a cause.

In his 14 seasons with the Lakers, first in Minneapolis but mostly in Los Angeles, with another pair of Hall of Famers, Jerry West and Wilt Chamberlain, as teammates, Baylor played with a creative flourish that had never been seen in pro basketball.

He was only 6 feet 5 inches — relatively short for a forward even then — but he played above the rim when he soared toward the basket. His ability to twist and turn in midair on his way to the hoop previewed the freewheeling shows put on by stars like Julius Erving, Magic Johnson, Michael Jordan and LeBron James.

When Baylor arrived in the N.B.A. in 1958, an All-American out of Seattle University, the pros usually scored on one-handed set shots or running hooks. Baylor added a new dimension. To read more go to the link below: