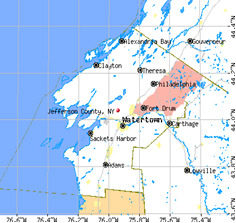 If one were to attempt to trace the history of Jefferson from its earliest occupation, a beginning would be made with the Indians of the Oneida and Onondaga tribes, whose hunting and fishing ground it was. In many parts of the county there are evidences of their early encampments and entrenchments. On the main line of travel from the Canadas to the Hudson valley the region was the scene of many bloody encounters between the Canadian Algonquins and the Iroquois. In nearly every town of the county, particularly those bordering Lake Ontario, are the remains of crude fortifications of Indian construction. These are usually on the hills and invariably face the northwest from whence came their enemy. The “first families” of Jefferson were red.

The first white man to visit Jefferson was, undoubtedly, Samuel de Champlain, who, in the autumn of 1615, with a force of 2,500 Indians, crossed from the “vicinity of Kingston to Galloup and Stony islands and from thence to near the mouth of Stony Creek in the present town of Henderson, where the canoes were concealed in the woods.” The unsuccessful campaign against the Iroquois which followed need not be recounted, but the fact that this visit occurred only eight years after the settlement of Jamestown by the English, their first on this continent, and preceded that of the Pilgrims in 1620 by five, gives emphasis to the years covered by the county’s history.

From the day of Champlain to the end of the French dominion in America, there were apparently no settlements made in this district. Military posts were established during the French and Indian war, notably at Henderson, and garrisons were placed in various parts of the northern New York country during the Revolution, but the district as a whole was only the haunt of the wandering trapper.

An indeterminate treaty was made with the Indians in 1784, which was made definite by the Oneidas in September, 1788, by which the territory of Jefferson was included in a vast domain ceded to the State of New York. Of more interest to the county was the so-called “Macomb’s Purchase,” which was the greatest grant of land ever made by a State to individuals, including as it did 3,670,715 acres. The area was divided into five great tracts, No. 4 of which included more than half of the present county of Jefferson. To the Macomb grant most of the titles to land are now traced.

Tryon County was formed 1772 from Albany but the name was changed after the Revolution to one less distasteful, Montgomery. In 1798 Oneida County was erected, including what is now Jefferson, and not until March 28, 1805, was this district set off with the name of the third President of the United States. As created, the county included parts of eight towns of Oneida County, but the boundaries of Jefferson have been changed three times. As now constituted the area of the county is 1,274 square miles.

Jefferson County is located in one of the most wonderfully beautiful natural sections of the State. From the lavish display of the “Thousand Islands” to the lower peaks of the Adirondacks it spreads in picturesque diversity. Nor does it lack in utility, for mixed with the wilds are interval lands of richest fertility. With its natural resources so marked, for so many years known to the soldiery who passed to and from Canada, it seems strange that the first permanent settler should not come until the spring of 1797 in the person of Noadiah Hubbard. Tradition has it that Lyman and Marvel Ellis visited that same year the region which now bears their name. In 1805, as Jefferson County, it was estimated that the inhabitants numbered 1,500.