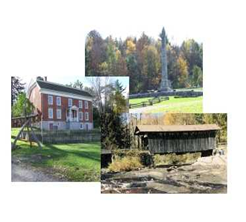 Herkimer County was erected from Montgomery County February 16, 1791, and, as first formed, embraced an enormous territory. The boundaries as given were: “All the territory bounded north by Lake Ontario, the River St. Lawrence and the north bounds of the State, easterly by the counties of Clinton, Washington and Saratoga; south by the counties of Montgomery, Otsego, and Tioga.” Many counties and subdivisions of these counties have been taken, but even now it has an area of 1,370 square miles, with such a distribution that it extend from the Adirondacks to the Mohawk.

It has a north and south dimension of 83 miles, making it the longest county in New York. Hamilton thrusts into the side of this line a corner which divides the area roughly into halves, which correspond somewhat to the differences in the two sections of the county topographically. North of this corner the surface is mountainous, wild, much of it being denuded forest land, rocky, sandy or thin, ill-suited to regular agricultural uses. There is still some of the timber left, and parts of this area are much frequented by summer campers. Lakes are numerous; hills are picturesque and healthful.

The section south of the angle is that which is the seat of most of the industries and population. The Mohawk divides this southern part, and the nearer one gets to the river the more one is in a fertile farming country where dairying interests are manifest everywhere. The character of the land and the training of the early settlers made of this section a cheese district. As early as 1785 this industry was started and in 1800 small quantities of this article were being exported. By 1826 the business had spread to nearby counties, and in 1830 a cheese trade with England had been established.

The specialty of the county was due not only to the fitness of the land for such purposes, but more because of the fitness of the people who inhabited it. The first permanent settlers of Herkimer were Germans from the Lower Palatinate, who, escaping from their own country, were left destitute in England. They were shipped from that country to settle on the “Hudson’s River,” that they might be useful in the production of naval stores and act as a frontier barrier against the French. They became dissatisfied with the Hudson conditions and immigrated to Herkimer region. Three of these companies of Palatinates arrived in New York before the end of 1722. Some from all three had come into the county before 1725.

Governor Burnet had already, July 9, 1722, secured some of the lands from the Indians to grant to these immigrants. Probably the first settlements of the new-comers were made during the years 1723-24, near the present towns of German Flats and Herkimer. The Revolution scattered the most of the colonists. The “Burnetsfield patent,” a document often referred to in the land deeds of today, was dated April 30, 1725, and names 92 of the Palatines to whom land were granted. There were 46 lots on each side of the Mohawk River, those embracing the villages of Ilion and Mohawk being of uniform shape and size.

The granting of lands to poverty stricken immigrants seems very liberal, but does not appear in so good a light when it is realized that the settlers were set alone among the Indians, and were to be the buffer against the French. In 1757 they had to bear the shock of the French and Indian war. In November of that year a band of Canadians and their Indian allies swept down on the little fort at Oswego, captured it, and immediately hurried down the Black and Mohawk rivers and massacred the inhabitants of the section on the north side of the Mohawk near the present village of Herkimer. A full account of this and later wars are to be found in other chapters of this work. To one interested in the events of the early Revolution, particularly those which took place in this section, the account of battles along the Mohawk, especially those in which General Herkimer defeated the forces of St. Leger’s on the Oriskany near Utica on August 17, 1775, preventing his juncture with Burgoyne, will bear reading. This engagement was one of the severest of the Revolution, numbers being considered.

With the coming of peace, came also a resettlement of the Herkimer district, in which many New Englanders had a share, and the establishment of industries and means of transportation. The thin line of travel wormed its way through the Mohawk Valley as the easiest route westward. The first State road through Herkimer was from Albany to Utica, constructed in 1794. The Mohawk was naturally the first means of handling heavy freight, although the rapids at Little Falls interfered badly. This difficulty was overcome by the building of a canal around the rapids in 1797. Some of the masonry of these old locks is still in a fair state of preservation. In 182O the Erie Canal was complete, superseding the Mohawk, and in the late thirties the Utica and Schenectady Railroad increased the transportation facilities.

Villages were being founded everywhere, great sections of Herkimer’s original territory were being taken to form other counties, and the county had subdivided its area into towns. Only by separate consideration of the divisions can we get a grasp of the history of the whole.  The oldest village in the county is Herkimer, incorporated April 6, 1807, with a population of 300.