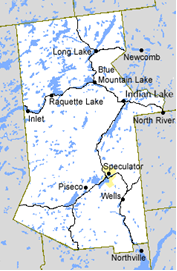 When New York State established a great reservation larger than Connecticut, known as Adirondack Park, Hamilton became the center and only county wholly enclosed by its boundaries. The purchase by the State of land within the county did not encourage any increase in the permanent population, for with more than half owned by New York, and eighty per cent of the remaining territory in private parks or controlled by lumber companies there was but a small fraction left open to private ownership. Hamilton, with an area of 1,700 square miles, had only a population of 3,970 in 1920; this, however, is greatly added to by the thousands who summer in this wonder camp ground of a nation.

Hamilton seems always to have been, until recent years, a terra incognita, a place where few ever had lived. Even the Indians, the “famed Iroquois,” had no permanent settlements here. As late as 1771 a map of Governor Tryon shows the region as belonging to the Mohawks, but so little had it been explored, not one lake showed in this territory so filled with them. It then was a part of Albany County. But the next year saw the division of a part of this great area into Charlotte and Tryon counties. After the Revolution, the name Tryon was so hated that in 1784 this section was called Montgomery in honor of the hero who died before the walls of Quebec. From this county, Hamilton was set off provisionally, April I2, 1816, and given a permanent organization in 1836

The most important historical incident of the colonial period was the “Totten and Crossfield Purchase” since this covered the greater part of the county. This was really the Jessup purchase, as the two whose names are connected with it, and are placed on most of the deeds since issued, were dummies for Edward and Ebenezer Jessup. Before the ending of the Revolution came an interest in the “unknown north.” The Jessup brothers had great influence with Sir William Johnson, Governor Dunmore and General Tryon. They wanted to buy all the land they could get above Albany. Having already made application for 40,000 acres, it was thought best to buy indirectly in the matter of purchasing some 1,150,000 more acres of the mountain section.

On June 7, 1771, to their agents, Tolton and Crossfield, was sold this great tract, and in the next year the Indians met in solemn conclave and also conveyed the land. For this the tribes received about three pence an acre, or a total of 1,135. Theoretically, the land was sold, but before being sealed and the bargain concluded, some $40,000 had to be turned over to King George III. Most of the modern conveyances of land are traced back to this original grant.

After two hundred years of surmise Hamilton began to be known and appreciated. Possibly Champlain passed through this section in 1615, shortly after Hudson anchored the “Half Moon” in the river that bears his name, and before there was a colony at Plymouth Rock. But it was not, however, until after the Civil War that any large number came to settle in this land of mountains and lakes. Timber was cut and the famed Raquette River, the second longest in the State, used to convey it to market. Great areas of land sold for small sums. Dr. Brandreth, whose English pill made him a fortune, bought 26,000 acres for $3,000 the timber from which, in 1900, was doing its best to make another fortune for his son, Dr. William Brandreth. The Whitney Preserve is of even vastly greater acreage.

It is as a summer resort and camping ground that Hamilton is now known best. Its mountains are not of the highest of the Adirondack peaks, but its lakes are not surpassed. In 1899 the first railroad was run through the extreme northwest corner of the county, and there is a branch of this same system reaching to Raquette Lake. Since 1900 good highways have been built to the more popular places. But it is the seclusion of most of the region which adds to its attractiveness. It is still “The Woods”; it remains “The Wilderness” of the early days.