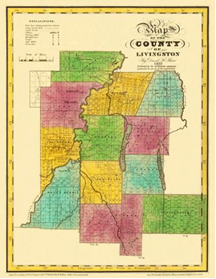 Livingston County is not a section that has been ravaged with the wars and events which are the incidents that go to make up what is called “history.” Instead of being the ground over which armies have marched, and for which they fought, it has rather always been the home of those who tilled and loved the soil, and with one great exception, been left in peaceful possession. Before ever the eyes of the white man looked upon this fertile land the Seneca had made it his granary, and the seat of the largest of his villages. He had attained some height in civilization, and acquired a few of its arts. Much of the land had been brought under cultivation; the forest had been cleared over quite large areas.

He grew his corn and grain, melons and vegetables, his apple and other fruit trees were wonders in the sight of the whites as later these were disclosed to them. The Seneca was the Keeper of the Western Gate in the confederacy known as the Iroquois, the living barriers against the enemies from the wide west reaches of America. The first mention of them by Europeans is that in the “Jesuit Relations” under the date of 1644-45, but Jacques Cartier knew of them a hundred years and more prior to this.

The one great exception to the peace of this region came as a consequence of the Senecas taking sides in a quarrel which was not their own. When the Colonies were struggling to be rid of the yoke of the Mother Country, the Senecas joined forces with the British, as did several other tribes. The result of this interference was the destruction of the homes and the laying waste of the Indian cornfields and orchard. In 1779 General Sullivan was sent by Congress to march to the head of the Indian country, burning as he went all the towns and possessions of the Iroquois, so that they might be completely removed from the struggle between two white peoples. Chenussio (Geneseo), the great town of the Seneca, was the end and aim of the march, and it was at this place, and in other parts of Livingston County that the climax of Sullivan’s devastating expedition was reached.

After wiping out forty Indian villages, burning more than 160,000 bushels of corn, and chopping down untold hundreds of fruit trees, he ended the power of the Iroquois forever. He did more than this, for his expedition discovered and disclosed the exceeding beauty and richness of the country, particularly that now enclosed in Livingston County, leading to its very early settlement after the Revolution.

The Indians received rather shabby treatment by their allies after their defeat by the Colonies, for there was no provision in the treaty of the Revolution which protected the Iroquois. They received rather better treatment by the victors, and in September, 1797, the tribes were gathered at Geneseo and a treaty was signed whereby the Indians transferred their lands to the State except certain selected spots which they reserved for their own use. Previous to this time there were few settlers in the county, although a few had located in the years following 1790. The most prominent of these pioneers was James and William Wadsworth, from Durham, Connecticut, who located at Geneseo, June 10, 1790.

They became large land holders later, and because of their liberal policy in the selling of this land greatly helped the settlement of the district. Most of the first settlements were at Geneseo, and near the sites of the old Seneca towns, and were made by folk from New England. Just a little later York, Avon and Caledonia were founded by colonies of Scotch.

Livingston County was formed from Genesee February 23, 1821, to which were added in 1846 and 1856 parts of Allegany County. It is located in the central part of the western half of the State, being bounded on the north by Monroe; on the east by Steuben and Ontario; on the south by Allegany and Steuben counties; and on the west by Allegany, Genesee and Wyoming counties. The Genesee River flows, through the district; there are several beautiful lakes, Hemlock and Conesus, being the most noted (Conesus was called by the Indians “Ganeasost,” meaning where the “heavens rest upon the earth”).

There are many streams which furnished water power to the pioneers, and some of these when canalized were the means of transportation in the early days. The whole county is an upland, with hills that in a few places reach an elevation of 2,000 feet; but the slopes are gentle, the terrain rolling rather than hilly, and the vast majority of its 380,665 acres are arable.

Livingston is almost exclusively an agricultural county, one of the foremost of the State. Its soil is almost universally good, being covered originally with a dense forest in which the hardwoods and deciduous trees were numerous. The river flats, while subject to over-flow, are broad and very fertile. Three-quarters of the area is the best of grain land, and it was by its wheat that this part of New York became known. Changes took place even as early as 1825, which took some of the profit out of wheat growing, and insects and disease brought about a shift to spring wheat. In these later years wheat has come back as a crop, mostly of the spring variety. The Indian showed the way in the matter of fruit growing, but it was many years before the settlers followed the example and planted trees that made this a banner fruit section.